Home Picture of the Day A Brown Study 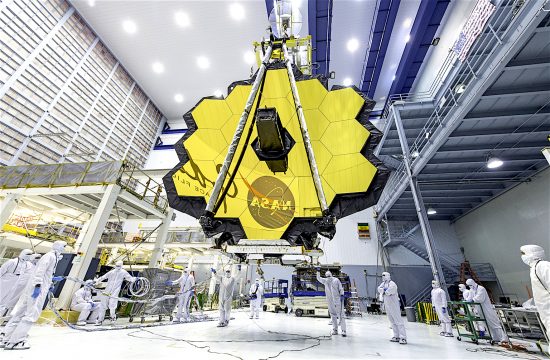 Brown dwarf stars could be harbors for life in the cosmos.

The James Webb Space Telescope (JWST) is scheduled for launch in October 2018 on a five-year mission. Its goals are to search for the earliest galaxies—meaning that it will look for those with the greatest redshift. That information is thought to shed more light on how galaxies evolve, including the evolution of stars and their planetary systems.

JWST is designed to “see” infrared wavelengths, with a 6.5 meter mirror. The mirror is constructed of 18 beryllium hexagons mounted on a lightweight framework. The mirror segments are coated with pure gold. Gold is an excellent infrared reflector, making the JWST’s mirror 98% reflective. This is a major advance over the Hubble Space telescope’s 85% reflectivity.

Infrared light frequency is longer than visible light’s .4 to .7 micron range and is is divided into near-infrared (.7 to 5 microns), mid-infrared (6 to 30 microns), and far infrared (30 to 1000 microns). The JWST detectors are most sensitive to the near and mid-infrared ranges. Devices must be extremely cold in order to detect infrared emissions. Since all objects radiate heat (which is infrared light), if the JWST operated at the same temperature as Hubble, any detectable radiation would be drowned out by the heat of the mirror, itself. JWST’s mirror segments must be kept near -220 Celsius, so it will orbit around the L2 LaGrange point. Sunshields on the chassis will help keep the mirrors shaded.

Louis Lagrange discovered the points that bear his name while conducting “three body” gravitational studies. He wanted to know how a third body orbits two large bodies in orbit around each other. Lagrange points are where gravity and orbital motion are in balance, especially in the Earth-Sun system. A spacecraft revolving around the Sun in a shorter orbit than Earth will overtake our planet, so it cannot maintain a relative station without using rockets to keep it stabilized. If the platform is placed between the Sun and Earth at just the right distance, it will take one year to orbit the Sun and will stay in a fixed position relative to the Earth. This is the L1 LaGrange point and is best for solar observatories like SOHO.

L2 is on the opposite side of Earth from the Sun, about 1.5 million kilometers distance. A spacecraft placed in that location would orbit more slowly than the Earth. The increased gravitational attraction of the Earth adds to that of the Sun, allowing the JWST, for instance, to go faster and to keep up with an orbital period equal to Earth’s. It is also unstable.

JWST could be a valuable resource for Electric Universe advocates. One consideration is the habitat around brown dwarf stars. Brown dwarfs could be one of the most numerous stellar categories, but they cannot be adequately studied with current technologies. Even the Spitzer Space Telescope, whose onboard tank of liquid helium coolant has been exhausted, was able to capture only a few images. One tantalizing specimen was estimated to be a mere 27 Celsius, prompting the need for a more detailed and long-term analysis of stars.

“While enormous time and resources have been poured into the effort to understand stars based on a single outdated idea, those familiar with plasma discharge phenomena have been paying close attention to the observed phenomena on the Sun and finding simple electrical explanations. After 100 years of neglect, an electrical model of stars is just beginning to emerge. It is an engineer’s view that offers a coherent understanding of our real place in the universe (cosmology) and practical insights for the future exploration of space. If the Sun shines as an electric light ‘plugged in’ to the Electric Universe, the objective tests become obvious. Perhaps, with a real understanding of stars we may reach childhood’s end in the cosmos.”