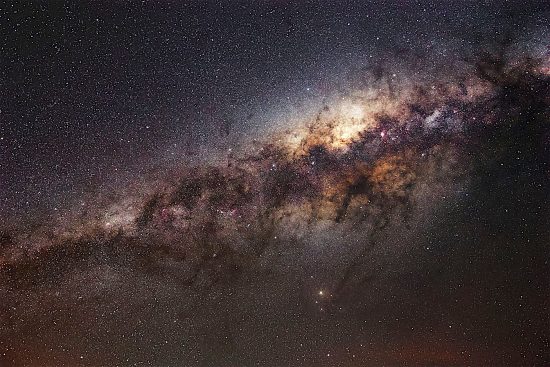 Looking toward the center of the Milky Way. Credit: ESO/F. Char

Plasma can be defined as any substance containing charged particles: electrically charged dust, neon lights, lightning, planetary magnetospheres, the so-called “solar wind”, stars, and even galaxies are matter in the plasma state. It is important to realize that plasma is a condition of matter. Just as solid, liquid and gaseous states might prevail, plasma is another condition that exhibits unique properties.

Filaments of electricity can flow in closed circuits through plasma. It is the existence of electric circuits in space that distinguishes Electric Universe theory from most conventional viewpoints. Phenomena that appear “mysterious” to space scientists are readily explained using observational evidence coupled with the results from laboratory experiments. That fact helps to distinguish Electric Universe concepts from others. Gravity cannot be modeled in the laboratory like plasma.

Since galaxies exist within a circuit of electricity that flows through the cosmos, they should be evaluated according to electrodynamic principles and not kinetic behavior. For example, twin lobes of gamma rays in an hourglass shape extend axially beyond the Milky Way’s center. Each structure measures approximately 65,000 light-years in diameter.

A recent press release states that there is also another formation near the galactic center that is proving difficult to explain, an X-shaped bulge of stars. The funnel-like lobes of radiation from the core provide a clue as to the formation of the X. The hourglass shape is an unmistakable signature of Birkeland currents squeezing plasma and charged dust into z-pinch compression zones.

Electromagnetic forces squeeze those conductive channels into filaments that tend to attract each other in pairs. Electric fields that form along the plasma strands generate an attractive force that can be 39 orders of magnitude greater than gravity. However, when they get close to each other, instead of merging, the plasma “cables” twist into a helix that rotates faster as it compresses tighter. It is those “cosmic transmission lines” that make up galactic circuits.

High-density currents flow out along the galactic spin axis and form double layers that, as mentioned, can sometimes be seen as radio and X-ray lobes around active galaxies. The currents then spread out around the circumference, returning to the core along the spiral arms. In an Electric Universe, large-scale plasma discharges form coherent filaments that exhibit electrodynamic behavior. Gravity and kinetic energy contribute to the behavior of galaxies but it is not their fundamental energy source. Stars in galaxies can form like silver beads on a string, lining-up for great distances.