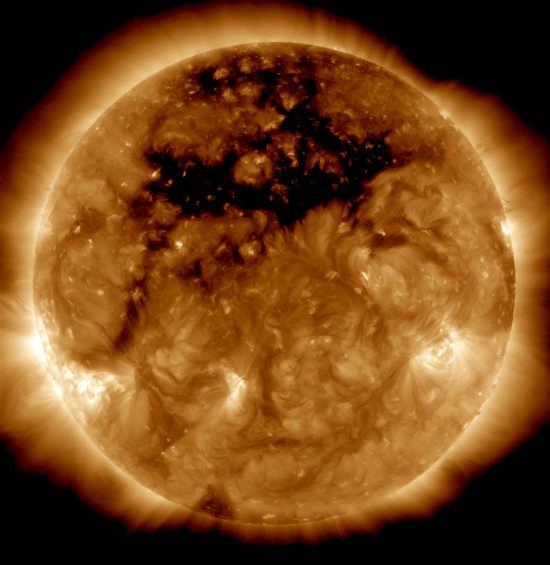 Why do coronal holes accelerate the solar wind?

Recently, the Solar Dynamics Observatory recorded a coronal hole as it moved across the Sun’s photosphere, causing a storm of charged particles to blast toward Earth. Heliophysicists believe that coronal holes are regions of “open magnetic fields”.

The thermonuclear model of the Sun sees temperatures in its core at more than 15 million Celsius, with compressive strain greater than 340 billion times Earth’s atmospheric pressure. 700 million tons of hydrogen are said to be converted into helium every second in the core.

One of the Sun’s greater mysteries is why temperatures rise to approximately 20,000 Celsius at the top of the chromosphere. However, the greatest mystery of all (from a consensus viewpoint) is why the corona can be as much as two million Celsius! Why does the hottest region of the Sun begin at an altitude of 4000 kilometers, extending over a million kilometers from its surface, without any significant temperature drop? Since the problems with magnetic reconnection theory are detailed many times in previous Picture of the Day articles, they will not be explained here.

Electric charge flowing out of the Sun is balanced by electricity flowing into it, so perhaps the changes in temperature indicate the magnetic field polarity and the strength of its electric field. If the Sun is connected to the rest of the galaxy by Birkeland current “transmission lines”, then its puzzling characteristics with respect to conventional interpretations are most likely demonstrating fluctuations in electric charge arriving from the Milky Way’s generator.

In the electric model of stars, the Sun is a positively charged electrode in a circuit, while the negatively charged electrode is located far beyond the planetary orbits. The “virtual cathode” is known as the heliopause. The electric solar model predicts that sunspots, flares, coronal holes, and all other solar activity comes from fluctuations in galactic electricity. Birkeland current filaments slowly move through the Solar System, supplying more or less power to an electric circuit that includes the Sun. The energy powering the Sun is focused from outside and not expelled from inside a thermonuclear core, so its inverted temperature gradient conforms to an electric discharge within intergalactic Birkeland current filaments. The Sun is a gigantic electric arc, not a ball of hot hydrogen gas.

Data from the now defunct Ulysses spacecraft, and confirmed by SDO’s ultraviolet studies, reveal that the solar wind speed varies inversely with coronal temperature—a completely unexpected result, since the opposite was predicted.

“The chromosphere has a strong electric field which flattens out but remains non-zero throughout the solar system. As protons accelerate down the chromospheric slope…they encounter turbulence…which heats the solar corona to millions of degrees. The small, but relatively constant, accelerating voltage gradient beyond the corona is responsible for accelerating the solar wind away from the Sun.”