Home Picture of the Day The Orion Plasma Formation 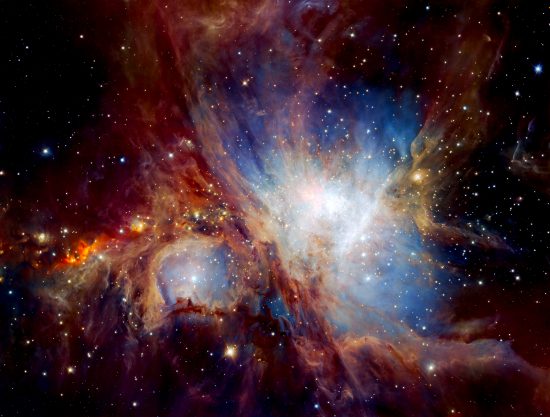 Most detailed image yet of the Orion nebula. Credit: ESO/H. Drass et al. Click to enlarge.

Nebulae are not just clouds of gas and dust.

Look up on any dark winter night and you’ll see the constellation Orion, the Hunter. Orion includes two unusual astronomical objects: the red giant star Betelgeuse and the Orion Nebula, faintly visible to the naked eye as the second star in Orion’s sword. It looks somewhat fuzzy because it is not a star, but a multi-light-year-wide cloud of interstellar dust and gas.

Several regions within the nebular cloud are said to be “star-forming”, because high frequency light is detected from what are called, “cosmic eggs”. Gamma rays, X-rays and extreme ultraviolet are emitted from what appear to be the glowing tips of condensed gas balls that “ignited” when fusion temperatures were exceeded.

Astronomers also discovered polycyclic aromatic hydrocarbons interspersed with the nebular gas and dust. The compounds were detected in some parts of Orion by their infrared signatures, along with water vapor and oxygen. When wood fires are not hot enough, some of the fuel is only partially burned, so its chemical properties are changed into a polymer without being carbonized. How the process works in nebulae is not understood, since no fire can burn there.

In an Electric Universe, evenly spaced coronal discharges perpendicular to the central column of dusty plasma between the upper and lower “bubbles”, or clearings, reveal a substantial electrical potential between the central discharge channel and surrounding nebular plasmas. In the image at the top of the page, visible z-pinch forces not only constrict plasma into a columnar form but also pull in surrounding dust, ions, and neutral matter. The increased density is why some parts of the nebula are optically opaque.

According to the standard model of stellar evolution, new stars and hydrocarbons “must be” the result of a compression wave passing through the nebula. A supernova explosion “millions of years ago” in another part of the galaxy is what pushed the Orion star-forming factory into action, making stars and organic chemicals. At no time does electricity enter in to the discussion. “Hot gas” is used instead of the word, “plasma”. Researchers will occasionally admit that gas is plasma, but they mean hot neutral gas when they use the term. All analyses of nebular clouds are based on kinetic models of gas behavior and not on the mathematics of electrified plasmas.

Plasma “bubbles” at each end of the dark, dusty central column are double layers, similar to the funnel-like z-pinches that generate all planetary nebulae. Consensus astronomers see “clearings” within Orion because their only recourse is light’s “pressure”, sweeping dust and gas away through windy shockwaves. Plasma theory describes stronger, more differentiated mechanisms resulting from electric fields. For example, there is no comparison between the “force” of light in an electroscope and the force of electromagnetic fields in an electric motor.

Electric discharges in plasma clouds create double layers, or sheaths, along the current axes. Positive charge builds up on one side and negative charge on the other. A strong electrical field exists between the sides, and if enough charge is applied the sheaths will glow, otherwise they are invisible. In plasma, electricity causes filaments. Filaments attract each other, but rather than merging they spiral around, gradually pinching down into arc mode discharges. Stars are born to such electrical parentage and not to the sterile hope of gravitational attraction.

The correct model for a nebula is a neon lamp. Electricity passing through the tube causes neon plasma to glow a pale yellow. Astronomers say shockwaves from a supernova are able to initiate many frequencies of light due to the heating of compressed gas. But, since more than 90% of the light from the Orion nebula comes from ionized oxygen, it should be thought of as oxygen discharge tube and not as a cloud of gas.

Astronomers infected physicists with “hot gas” theory, causing a 60 year failed experiment with nuclear fusion. Squeezing hot gas into a volume small enough for fusion to take place has not worked and it will never work. The theory of star formation through fusion reactions is untenable, so considering plasma theory might be a more productive path.