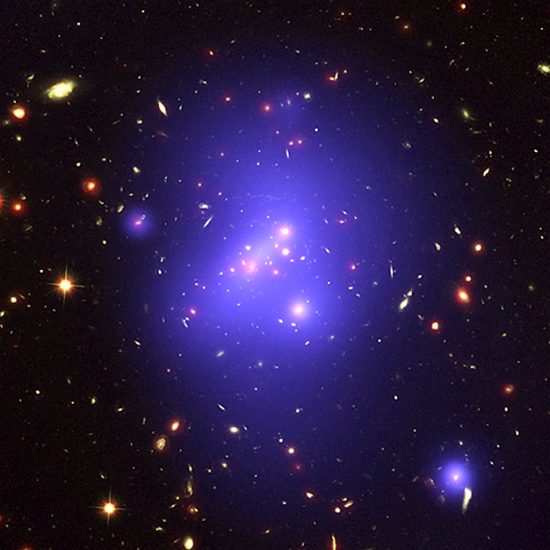 Do galaxies bump into each other?

High temperatures in galaxy clusters are an enigma. Because astronomers have only one force in their bags of tricks—gravity—whenever energetic events are found, like high temperatures in the galaxy cluster shown above, it “must be” caused by a gravity-driven collision in the remote past. Electric charge is sometimes considered, but it is usually said to be negligible in its effect, if it has any effect at all. In visible light, there is a serene, undisturbed galaxy cluster. In X-ray frequencies, temperatures over 70 million degrees exist where two clusters collided.

Astronomers believe that plasma is merely ionized gas, behaving according to physical laws that apply to neutral gas (with modifications for electromagnetic effects). They cannot measure the properties of extragalactic space, directly, so they develop mathematical models based on the behavior of neutral gases. Hannes Alfvén took a different approach. In his monograph, Cosmic Plasma, he described how theory has lost touch with reality. Rather than theorize about plasma, he studied its properties in the laboratory.

In previous Picture of the Day articles, it was noted that charged particles streaming from stars like the Sun are called a “wind” by the majority, instead of an electric current. Ions accelerated by a magnetic field are referred to as “jets”, instead of the collimated transmission of electrical energy through space. Changes in the density and speed of charged particles are almost always deemed to be “shock waves”, and not the mark of double layers that can store and dissipate electricity, or even explode.

In the consensus view, IDCS J1426.5+3508 is thought to be incredibly hot because the molecules of gas and dust crashed into each other, resulting in X-rays flashing out from the blue color-coded regions. Over the years, computer simulations assured astrophysicists that what is unobservable “billions of light-years” away can be modeled on the desktop. It is not surprising, therefore, that observations appear to match the simulations. The ideas used to build computer algorithms are also in the minds of those working with the instruments. Building a device that is designed to see what has been simulated is how modern science works. Carts and horses come to mind.

A lack of knowledge about electricity in space can account for the opinion that gases “crashing into each other” produce X-rays and other energetic emissions. Since perception comes from training and education, without exposure to theories about the behavior of electricity flowing through plasma no perception of it can exist in the mind’s eye.

Among the many differences between plasma and models based on neutral gas are temperature anomalies like the ones seen in various galaxy clusters: temperatures are 10 to 100 times higher than expected. So, from an Electric Universe point of view, anomalous temperatures are a normal property of plasma interaction between clusters.