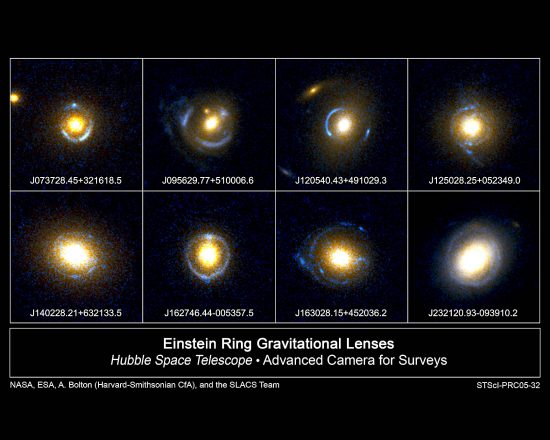 Space and time do not bend.

“Gravitational lensing” theory is used to explain the arcs of glowing material surrounding some galaxies. They also use it in conjunction with other theories to help deal with puzzling observations. One of those puzzles involves the so-called expanding Universe.

Combining data from the Hubble Space Telescope with ground-based measurements, astronomers map what they believe to be the effect that gravity might have on light as it travels through space. In particular, the Sloan Digital Sky Survey looked at previously catalogued redshift information from hundreds of thousands of galaxies.

Minute differences in how some galaxies are shaped point to what they claim is a “warping of spacetime” due to unseen conglomerations of matter. It is that space-bending effect that holds their hypothesis together. The intense gravity generated by the concentrations of invisible (or “dark”) matter is said to cause light rays from remote objects to bend as if seen through a lens. However, it is a “weak gravitational lensing” effect, so the slight variations can only be identified statistically.

In the image at the top of the page, galactic redshift data was plotted against the altered shapes of distant galaxies due to weak gravitational lensing. Based on complex software programs, the gravity model produced galaxy plots that indicate the presence of other background objects.

Conventional astronomy sees light “bending”because their theories allow space and time to act like things that can be manipulated by gravitational lensing. What is more important is that the entire premise depends on a single assumption, that higher redshift equals greater distance.

The scientific press often repeats that dark matter makes up “25% of the Universe” or that dark energy makes up “70% of the rest of the Universe.” To anyone familiar with plasma physics, it is well known that plasma makes up 99.99% of the Universe. It is a fascinating convergence that the amount of gravitational mass invented to save conventional theories is the same as the ionized plasma that is overlooked.

As retired Professor of Electrical Engineering, Dr. Donald Scott points out, gravitational lensing is solely a phenomenon of mass, but galaxies are made of plasma. The primary quality of plasma is electricity, and the effects of electricity overshadow the effects of mass. Energetic phenomena that require 96% dark matter and dark energy require only 4% plasma—the quantity actually observed.

The rings in the above image, at one arc-second or greater diameters, seem far too large to be due to lensing. They are most likely plasma discharge effects similar to those in planetary nebulae. Most of the rings are composed of bright spots that seem to be associated with filamentary spokes emanating from the so-called “foreground” galaxies. This is typical of a plasma focus discharge viewed along the axis.