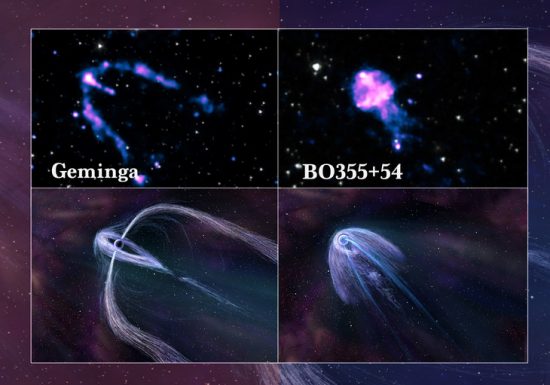 The basic idea is to shove all fundamental difficulties onto the neutron and to do quantum mechanics in the nucleus.
— Werner Heisenberg: Letter to Niels Bohr, June 20, 1932. Quoted in Uncertainty: The Life and Science of Werner Heisenberg (1992) by David C. Cassidy.

Neutron stars are said to spin at incredible speeds. For example, Germinga, approximately 800 light years from Earth, is thought to be rotating at five times per second, or around 300 RPM. According to a recent press release, pulsars display only one type of pulse or the other; flashing radio waves or gamma rays, but never both. Geminga exhibits gamma-ray pulses, while B0355+54 is a bright radio pulsar. Bettina Posselt, senior research associate in astronomy and astrophysics, at Pennsylvania State University wrote:

“It’s not fully understood why there are variations between different pulsars. One of the main ideas here is that pulse differences have a lot to do with geometry — and it also depends on how the pulsar’s spin and magnetic axes are oriented with respect to line of sight whether you see certain pulsars or not, as well as how you see them.”

Astronomers think that a neutron star forms when a massive star collapses at the end of its life cycle. Gravity is so great that it cannot resist compression, so electrons are forced into the atomic nuclei. This means that a star can be as small as a city block, but can be so dense that a milliliter weighs 10^12 kilograms. As the theory states, once contraction begins, angular momentum increases, resulting in rapid rotation. Long narrow trails from Geminga, as well as B0355+54’s double tail, represent jets emanating from the spin axes of each pulsar. A torus also surrounds each pulsar’s equator.

Due to its rapid rotation, a neutron star’s magnetic field becomes theoretically focused at each pole, creating a narrow energy beam shining like a lighthouse. Conventional astronomers assume there is a large population of neutron stars in the Milky Way, so a population of pulsars must also exist. Pulsar wind nebulae (PWN) are often found in conjunction with the donut-shaped rings and jets that form along pulsar spin axes.

Whenever electricity flows through clouds of dusty plasmas, it concentrates forces because of the “z-pinch” or “Bennett pinch” effects. Depending on how much electricity is flowing through the circuit, any one star’s electromagnetic field will be greater where there is more current. Rather than kinetic energy, Electric Universe advocates assume that pulsars oscillate because synchronous vibrations occur in electric circuits. Electricity stored in double layers is responsible for their outbursts. That is why pulsars do not shine only in visible light. The outbursts begin with sudden peaks of energy, which gradually decline like a stroke of lightning.

Pulsars are probably concentrations of electricity being focused by a “dense plasma focus” effect in double layers: regions of electric charge separation that form in plasmas. A double layer consists of oppositely charged parallel layers moving past each other, resulting in an electric field across the layers. This voltage difference accelerates electrons in one direction and positive ions in the other direction. Since moving charges generate electricity, there is an electric current present. If there are sufficiently large potential drops and layer separation, electrons might accelerate to relativistic velocities, producing synchrotron radiation that is detectable as X-rays or gamma rays.

So called, “pulsar winds” create PWNs that radiate energy across the electromagnetic spectrum because they are clouds of charged particles. Therefore, there are significant numbers of PWNs that are not associated with pulsars.

“It is assumed that a supernova can ‘squeeze’ stellar protons and electrons together to form neutrons. A first-order wild conjecture. The model incorporates many unproven assumptions about the unseen internal structure of stars. If the implosion is not spherically symmetrical there may be insufficient ‘squeeze’ to force protons and electrons to merge, even if that were possible. No account is taken of electrical effects. Our own Sun with a mean density only slightly above that of pure hydrogen, shows that electrostatic forces are at work within stars to offset compression forces. It is assumed that it is possible to form a stable neutron star. When not associated with protons in a nucleus, neutrons decay into protons and electrons in a few minutes. Atomic nuclei with too many neutrons are unstable. If it were possible to form a neutron star, why should it be stable?”

The electric model of stellar behavior provides better explanations for most astronomical observations.