Home Picture of the Day Plasmoids are the Power

Plasmoids are the Power 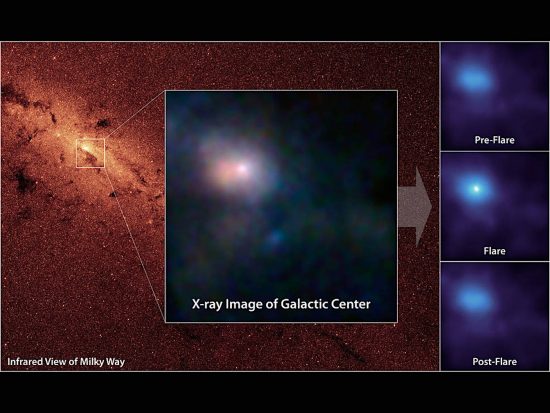 High energy X-rays from a plasmoid in the center of the Milky Way. Credit: NASA/JPL-Caltech

According to a recent press release, there is a so-called, supermassive black hole (SMBH) at the center of the Milky Way that is tearing stars apart and flinging the remains into space at speeds of 10,000 kilometers per second. The shredded stars then coalesce into planet-sized objects with masses that can exceed 2×10^37 kilograms, or as much as ten Jupiters.

It is not from observational data that the concept is derived, it is from computer models designed to simulate someone’s idea about what might be going on with the SMBH, Sagittarius A* (should such a thing exist).

“A single shredded star can form hundreds of these planet-mass objects. We wondered: Where do they end up? How close do they come to us? We developed a computer code to answer those questions.”

There are thought to be thousands of “free-floating” planets wandering through space. Why? It is because of how stars and planets theoretically form. Protoplanetary disks, as consensus understanding sees them, are prone to collisions among their evolving clumps of matter until they settle down into stable arrangements. Some of those clumps condense into gas giants or rocky bodies, while others are destroyed. However, astronomers believe that many of those new planets are subsequently expelled from their systems. The literature suggests that free floating planets might exceed the number associated with stars. The ultimate answer, though, is that they do not know.

As the announcement from Harvard University states, those newly minted planets are probably different from those that evolved “naturally”. The researchers borrow a term from Carl Sagan and state that they are made of “star-stuff”, so their ingredients will not be that same because different parts of exploded stars will form different planetary objects. The question is, how to tell them apart?

There are significant problems with both ideas, protoplanetary evolution, as well as black hoes, in general. Black holes can not be seen by the most powerful telescopes and radiation sensors, but astrophysicists continue to maintain that they exist because of their effects. They assume that matter is accelerated and compressed until it is “spaghettified”, or stretched inside the “event horizon”, until it is torn apart and reconfigured into more “rogue planets”.

Since almost all (more than 95%) of galaxies are said to be home to one or more black holes, they might all be shooting “spitballs” at us from vast distances. Since matter spins around a black hole at extreme velocities, consensus opinions state that it heats up from friction, generating X-rays and ultraviolet light. It is those emissions that are interpreted as indirect evidence for black holes.

Previous Pictures of the Day take issue with both aspects of this new computer model. The terminology, itself, is highly speculative and ambiguous. Protoplanetary discs and gravitational tides, for example, are invoked in order to explain how stars are destroyed and remade. To say that X-rays and ultraviolet light in space are created in gravity fields is to betray an ignorance. Experiments in the laboratory create those energies by accelerating charged particles through an electric field.

There is no experiment that can provide evidence for matter collapsed to “near infinite density”. Rather, Bennet pinches (z-pinches) in plasma-state material form plasmoids that then become stars. When the electric flux inside double layers within galactic circuits gets too high, there is a sudden “short circuit” that draws energy from the surrounding space. That energy could be concentrated from hundreds of cubic light years and then discharged in a burst of cosmic lightning, generating X-rays or flares of ultraviolet light.

X-ray radiation from a plasmoid in the Milky Way’s heart is the same as from stars undergoing strong electrical stresses. A plasmoid is a charged particle accelerator, so electrons spiral in the electromagnetic fields and give off X-rays. The diffuse currents then flow toward the galaxy’s equatorial plane and spiral back toward the core.

In an Electric Universe, electromagnetism is more than able to create celestial phenomena, without the supernatural physics of SMBHs. Plasma discharge events are commonly known to generate high-energy light. The greater the electric charge flow, the higher the frequency of light will be emitted. Supply enough power and even gamma rays are released.