Home Picture of the Day Clenched by Iron Bands 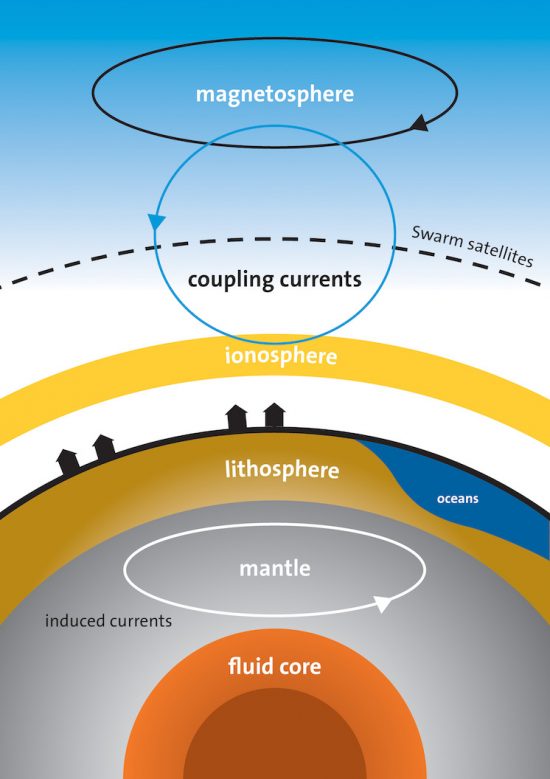 Is it liquid metal that circulates below the surface?

On November 23, 2013 the European Space Agency (ESA) launched the Swarm mission satellites from the Plesetsk Cosmodrome in northern Russia. Swarm consists of three identical orbiters, Alpha, Bravo and Charlie, placed in two different orbital planes. Alpha and Bravo fly side-by-side in an 87.4º inclination at an altitude of 450 kilometers (which will slowly decay to 300 kilometers), while Charlie was placed in an 88º inclination at 530 kilometers. All three are in a polar orbit. Propellant on the three satellites is expected to last about five and a half years. They will then burn up in the atmosphere.

Among other instruments, each satellite is equipped with a vector field magnetometer and electric field sensor, so that Swarm can measure variations in the electromagnetic fields generated by Earth’s oceans and lithosphere. Since Earth’s magnetic field is thought to be created by an “electric dynamo” thousands of kilometers below the surface, there is no way to “see” what is taking place there except indirectly.

“We have very few ways of probing deep into the structure of our planet, but Swarm is making extremely valuable contributions to understanding Earth’s interior…”

Earth’s electromagnetic field does not originate from a single source. Instead different areas generate greater or lesser fluctuating electromagnetism—exactly how it changes is not known. Swarm analyzes differences in the time signatures among the satellites, as well as electromagnetic flux density surrounding Earth’s fields, in order to determine what factors influence those changing fields.

So far, Swarm data indicates that ocean water forms an electric current that, in turn, induces electromagnetic feedback in the mantle, a region between 30 kilometers deep under the continents and 5 kilometers below the ocean floor. Although the effect is small, it contributes to Earth’s overall intrinsic fields. An important note is that the electric charge flow is induced by coupling with the magnetosphere.

Recently, ESA announced the discovery of an electromagnetic “jet stream” below the crust in Earth’s higher latitudes. “Jet” might be somewhat of a stretch, since the speed of the current is approximately 40 kilometers per year. Compared to movement of material nearer the core, it is said to be four times faster. Planetary scientists attribute these readings to liquid iron circulating around the poles.

In an Electric Universe, Earth is not an isolated body whose fields and forces come from internal activity, alone. Rather, as previous Picture of the Day articles point out, Earth’s ionosphere is connected to the Sun by filaments of electric charge, so upper regions of the atmosphere are influenced by solar emissions. Earth has an electrically active plasmasphere, so it is “plugged-in” to a an electrical circuit. For example, electric charge flow between the ground and the ionosphere, called “the atmospheric electric potential”, can reach 240,000 volts, sometimes exceeding 400,000 volts.

At around 150 kilometers altitude, the “dynamo region” is where Earth’s magnetic field exhibits a maximum electric equipotential, the most powerful charge flow along Earth’s geomagnetic equator. However, it is not the ionosphere that produces such intense electrical activity, it is the Sun.

In May of 2007, NASA’s THEMIS satellite detected a “magnetic rope” in the magnetopause as wide as Earth, itself. Approximately 70,000 kilometers out in space, the magnetopause is where the solar wind meets Earth’s magnetic field, providing a conduit for electrical energy from the Sun. As the illustration at the top of the page reveals, charge flow from the Sun is coupled to the magnetosphere that then completes a circuit with the ionosphere. Ionospheric currents then induce charge flow in Earth’s subterranean strata. That electric flux is known as a “telluric current”.

Perhaps it is not rivers of molten iron that Swarm detected, but streams of electric charge circulating through zones that are more conductive to charge flow from space.