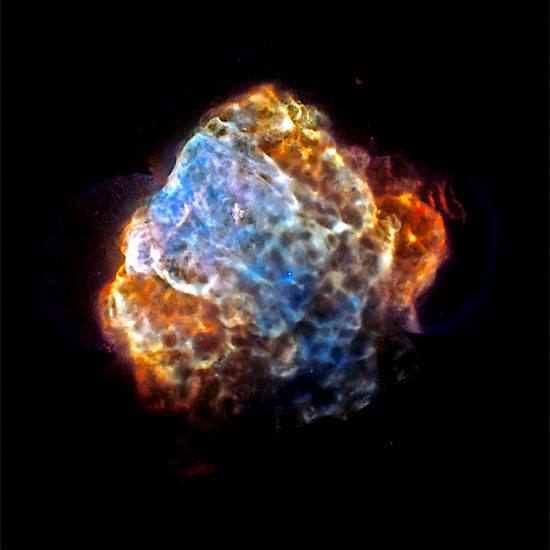 What is a supernova?

In an Electric Universe, stars do not follow a course through life that conventional understanding demands. Since stars are not balls of gas squeezed by gravity, other physical conditions must be considered. Plasma, for example, is not merely a “hot gas”, it is ionized and electrically charged. Since it is ionized, it does not behave like a pressurized gas, so gravity, alone, is insufficient when it comes to explaining star birth and star death.

According to a recent press release, “…about a third of core-collapse supernova remnants have a pair of ears, and that these side bulges were probably inflated by jets.”

Electric Universe agrees with modern physics: a supernova is an exploding star. However, there is much more to that story. Plasma should be thought of as a condition of matter and not a “substance”. It is an emergent phenomenon out of complex electrical activity. “Emergent” means: “arising as an effect of complex causes and not analysable simply as the sum of their effects.” As previously written, properties like filamentation, long-range attraction and short-range repulsion, cell-like differentiation, and characteristic instabilities indicate a system of interaction.

Plasma stars are fueled by external electric charge flowing through vast circuits in space. Rather than “core rebound”, supernovae are the result of a stored electromagnetic energy release, something like a capacitor when its dielectric medium is overcome. Electrical energy in the circuit is suddenly concentrated at one point, initiating a double layer detonation.

When a star’s double layer explodes, its stellar circuit shorts out, blasting out radiation across the entire electromagnetic spectrum from radio to gamma rays. This accelerates the double layer’s expansion, along with the charged particles composing it. Acceleration can continue out to many stellar diameters, giving off a burst of high-energy “light” like that from a lightning bolt—rapid onset and exponential decline.

In many cases, supernovae emit concentrated jets of material that burst from their axes. Those jets are said to sweep out gas and dust from around the exploding star, forming the “cute features” called ears among the “glittering shrapnel clouds” discussed in the Cornell University news release. However, since jets are electromagnetic in nature, and the plasmas through which they move are electrically charged, shock waves and heat are by-products of a phenomenon that is primarily electrical.