Home Picture of the Day Split the Sky 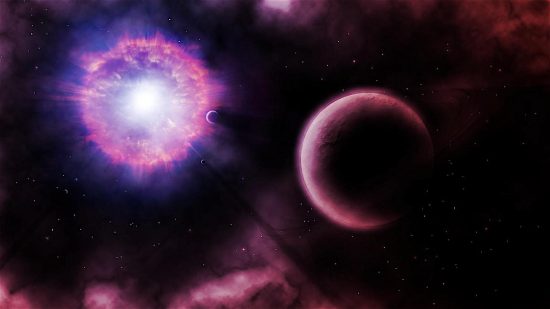 According to a recent press release, two novae were spotted in the constellation Sagittarius. One, temporarily identified as TCP J18102829-2729590 and the other one, called ASASSN-16ma, were found in late October.

A nova explosion is thought to occur when a white dwarf star in orbit around a larger companion draws matter away from the larger star onto its surface. As theories state, gravity compresses the material against the white dwarf’s rigid geodetic. The compacted material reaches fusion temperatures, sending pulses of high-frequency light and powerful shock waves into space. As the press release states, it is like “…a gigantic bomb going off”.

Binary stars are common in the galaxy. More than half of all stars have one or more companions. Since stars are remote from one another, this suggests that something favors the formation of multiple stars. One possible electric mechanism is fissioning. A star’s electrical stress is concentrated on its surface. If the electrical flux is too great, the star might split into two stars. The surface area of two stars is greater than the surface area of one, so the new system is able to accept more electrical stress.

Electric charge flowing in plasma generates a magnetic field that constricts the current. As pointed out in previous Picture of the Day articles, the constricted channel is known as a Bennett pinch, or z-pinch. Fluctuations form double layers with large potential voltages between them. Electric forces in double layers can be much stronger than gravity, while z-pinches can cause intermittent interruptions in current flow, causing brightening and dimming of the events.

Why is this brightness variation so important? Nova explosions are supposed to be based on thermonuclear models of behavior, so there should be no fits and starts. Nuclear explosions do not exhibit variability in their expansion. So what could be the cause of these anomalies? Is a rewrite of theory required?

Double layers can accelerate charged particles. Double layers can explode, releasing more energy than is locally present. It is this effect that is seen in stellar flares or so-called “novae.” Fissioning to relieve electrical stress should present some common characteristics: brightening and dimming, a change in spectral type, and the appearance of a nebular cloud.

Nova (and supernova) eruptions could be thought of as coronal mass ejections that encompass an entire star. Photospheric double layers expand: the expansion rate and brightness are proportional to the power input. Double layer expansion accelerates the plasma that comprises it, but also accelerates charged particles that are crossing it, creating high-speed collisions (along with synchrotron radiation) that show up as X-rays.

Expansion into surrounding plasma generates shock waves, but those waves are driven by a surge of electric charge. They are not due to stellar H-bombs. Just as the solar wind continues to accelerate past the planets, stellar wave fronts continue to accelerate. Ballistically driven explosive debris slows down.

Instead of revising outdated theories, Electric Universe proponents would like to see a complete revision of thinking where plasma and electric double layers are given precedence.