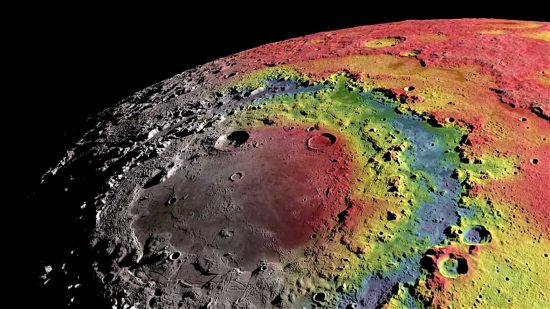 Impact features are probably something else.

Mare Orientale is located on the Moon’s rim, as seen from Earth, making it difficult to see with Earth-based telescopes. The Mare is almost a complete concentric ring structure with a surrounding basin of regolith. It is bounded inwardly by a steep scarp and topped by sharp massifs.

Using data from the Lunar GRAIL mission, planetary scientists from Brown University think that their new computer models answer questions about how such large basins are created elsewhere in the Solar System. Their conclusions are that such features on other planets and moons are the result of kinetic processes.

According to a recent press release, a new study determined that Mare Orientale formed as the Moon’s crust “rebounded” after an asteroid strike. “… warm and ductile rocks in the subsurface flowed inward toward the impact point.” It was calculated that approximately 1.3 million cubic kilometers of rock was blown out of the Moon.

“This was a really intense process. These several-kilometer cliffs and the central ring all formed within minutes of the initial impact.”

Johnson is right about how fast the structures on the Moon could have formed, but he is missing the most important clues about Mare Orientale that are hiding in plain sight. Evidence for electrical scarring on various bodies in the Solar System is coming to light. It is now possible to categorize peculiar features that are found in space, as well as here on our planet. Multi-ringed basins are found in many different locations on other worlds.

All of them have flat inner plains with vertical cliffs encircling the interior, such as Renoir Basin on Mercury. Some of those cliffs are several kilometers high. A secondary plain with a deep outer perimeter, like a v-shaped canyon, is another common feature. Surrounding that secondary plain will be another ring of cliffs, often higher than the inner ring, with a more gradual drop-off extending outward from the central structure. In some of the larger basins that pattern is repeated several more times, with shorter cliffs and broader plains, until they finally merge into the bedrock.

They are found (in no particular order) on Tethys, Mercury, Callisto, Miranda, Earth, Venus, Mars, and most likely other locations soon to be discovered. When future space probes are sent to explore the moons and planets, it is probable that more multi-ringed basins will be found.

What created the basins? Was it the impact theory as favored by consensus opinion? Did gigantic mountains of rock strike all the bodies listed above? Did a 10-kilometer-wide meteor collide with Earth and excavate the multi-ringed Chicxulub crater that supposedly killed-off the dinosaurs?

Laboratory experiments with electric charge in plasma show that electricity can appear in three modes: dark, glow and arc, depending on the voltage and charge density. Arc mode, which has a very high charge density, is used for precision machining in metal.

The degree of current filamentation in arc mode discharges depends on the density of the medium through which the current passes. Similar discharges passing through a vacuum (or a thin atmosphere) produce a columnar channel that spins around its axis. In the glow mode, this channel looks like a tornado of fire. The same current, if it travels through a thick atmosphere, branches into filaments. These filaments form concentric circles around the primary axis.

When electricity passes over a solid body it erodes material from the surface where arc discharges touch down. Pits (or craters) left by electric arcs are usually circular because the electric forces constrain the arc to strike at right angles. Since an electric arc is composed of two (or more) filaments rotating around a common center, the surface can be excavated by a plasma “drill bit”, leaving steep sides and a “pinched up” rim of debris.

If the filaments are sufficiently separated, the bottom of the crater, as the material is removed, will be electrically heated, possibly burned, and then melted flat. This explains why so many of the inner regions of multi-ringed formations are so often dark. The abundance of small craters that appear on the rims of the larger rings (such as Mare Orientale) testifies to the probability of electric arc discharges. As the arc travels, it punches out a chain of craters. If the craters overlap, the result is a steep-sided trench with scalloped edges. The arc can cut a trench and then jump some distance away before cutting another one.

The origin of the multi-ringed basins is most likely not due to asteroid or comet impacts billions of years ago, but to the action of interplanetary electric arcs, burning hot and explosively violent.