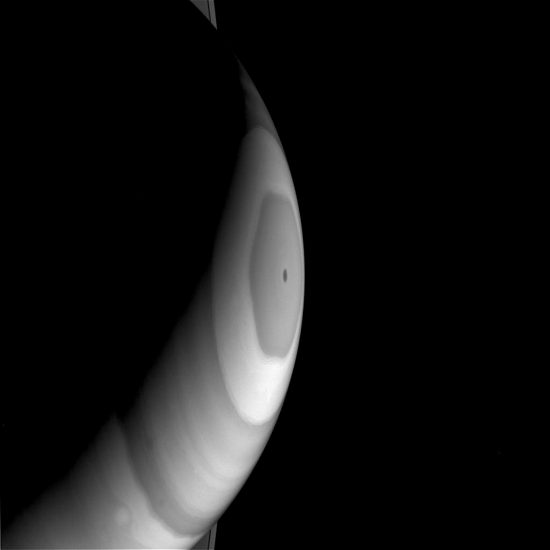 Planetary scientists already knew about material sticking out of the rings in a few places, but until Saturn reached its equinox it was not possible to measure how high these “ridges” are. Saturn’s main rings are approximately 140,000 kilometers wide, but were only thought to be between 10 and 30 meters thick until the discovery of the vertical “walls” extending along the edges of some rings. Some of the other newly found formations are ripples over four kilometers high.

How did these strange clumps, undulations, and ridges form? According to theories presently under consideration by the mainstream, they are due to collisions and shock waves. Gravitational attraction from so-called “shepherd moons” is also said to be responsible.

Some moons, such as Daphnis, move up and down through the ring plane, but they do disturb the motion of the ring particles. However, as was discussed in another Picture of the Day article, Saturn’s rings and moons are electrically charged objects moving within its vast plasmasphere. The instabilities inherent in that system most likely contribute to the formation of unusual features.

When shepherd moons pass close to the rings, their effect is not like a turbulent wind, which happens when a gravitational field’s torque effect acts on a cloud of fine particles. Instead, sine waves, perpendicular “braids,” and cylindrical arcs are seen. Some are multiply woven, like those in the remote F-ring.

In November 1980, the Voyager 1 spacecraft, now billions of kilometers away from Earth near the Sun’s heliospheric boundary, flew by Saturn. At that time, it recorded an astonishing image, a hexagonal formation in the clouds at the north pole. However, Saturn’s north pole was tilted away from Earth for many years after, preventing ground-based telescopes from obtaining any other images.

Hexagonal and other polygonal shapes are often seen in the eyes of hurricanes, so planetary scientists think that weather patterns on Saturn are responsible for the hexagon. It is conventionally thought that fluid dynamics creates the structure. In one experiment, a tank was filled with viscous fluid split into concentric divisions, so that they could be rotated in opposition to each other. As the speed of rotation varied, different features were observed in the liquid. At one point, a hexagon appeared with rotating vortices at each of its sides.

The fluid dynamic experiment seems to provide a plausible description of what is happening on Saturn if several factors are ignored. First, there are concentric rings around the hexagon, each with different temperatures. Second, Saturn’s north and south poles are hotter than theories predict. Third, there are aurorae at the poles. Fourth, there are powerful currents of electric charge entering and leaving Saturn’s poles, connecting it to its family of moons. As previous Picture of the Day articles argue, the plumes of Enceladus, for instance, demonstrate charge exchange between it and Saturn.

All of these points prove the electrical nature of the Saturnian environment. Simple kinetic experiments, conducted in Earth’s gravity field, are insufficient when electrical effects are considered. This also leads to another idea: perhaps the polygonal eyes of hurricanes should be reevaluated in the light of electrical theories rather than blowing winds and “Coriolis effect“.

Beams of electricity flowing through plasma produce a central column surrounded by concentric cylinders. The cylindrical filaments create evenly spaced vortices surrounding the column. As the filaments rotate around one another, a preferred hexagonal cross-section forms within the innermost column. The hexagon at Saturn’s north pole is another example of electrical activity in the Solar System on a tremendous scale. Other images from Cassini reveal that the north pole of Saturn is similar to the south pole: both locations are home to spinning vortices.