Home Picture of the Day Grand Finale Part One 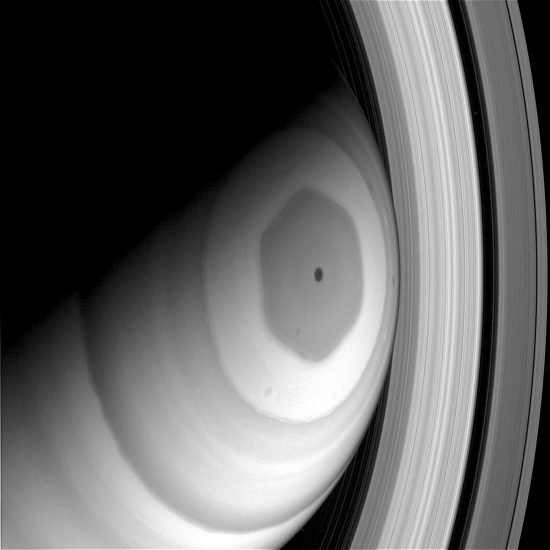 The Cassini mission is nearing its end.

The Cassini spacecraft recently celebrated its twelfth year in orbit around Saturn, with its end of life approaching on September 15, 2017. Cassini was launched from Vandenberg Air Force Base on October 15, 1997. Including the Huygens lander, Cassini was 6.7 meters high, four meters wide and weighed 5712 kilograms on launch day. Cassini entered orbit around Saturn on June 30, 2004.

The Huygens lander separated from Cassini on December 24, 2004, landing on Titan some 20 hours later. The first pictures from Huygens revealed a surface covered with pebbles.

Many things about Saturn changed since the two Voyager spacecraft passed by the giant gas planet years earlier. Saturn’s magnetosphere grew larger by more than a million kilometers and then contracted, only to begin expanding again. The spokes in Saturn’s B ring disappeared and then reappeared. The equatorial thunderstorm (known as the Dragon Storm) that raged continuously broke up, moved toward the poles, and then erupted again in the lower latitudes.

The most likely explanation for the storms on Saturn is that they are equivalent to sunspots. As the Sun changes its behavior over the course of a 22 year cycle, the electrical output that connects it with its family of planets varies. If Saturn’s Great White Spots, Dragon Storm, and ring spokes are driven by the same galactic Birkeland currents that drive the Sun, they should get stronger and closer to the equator as the sunspot cycle oscillates. That is just what happened over the past three decades.

It is significant that energetic phenomena on Saturn are occurring irrespective of whether the sunspot cycle is at maximum or minimum: the Sun is exhibiting electrical effects, although it has just passed solar maximum. A previous Picture of the Day suggested that changes in Saturn’s magnetic orientation could be the key, rather than the strength of the solar magnetic field.

In 2008, scientists from the Max Planck Institute discovered partial rings around Saturn in a nearly invisible collection of small arc segments. Using the Cassini-Equinox magnetospheric sensors, the team found two areas where highly energetic electrons suddenly drop out, presumably because something is absorbing them.

The invisible rings are most likely another manifestation of the electrical environment that exists near Saturn, since Cassini detected charged particles. An electrical theory for Saturn’s rings was originally proposed by Kristian Birkeland in 1913. He wrote: “It seems almost incredible that such a ring of cosmic dust should be able to exist for ever, so to speak, without other governing forces than gravitation…” Electricity can also help explain the anomalies in the ring plane.