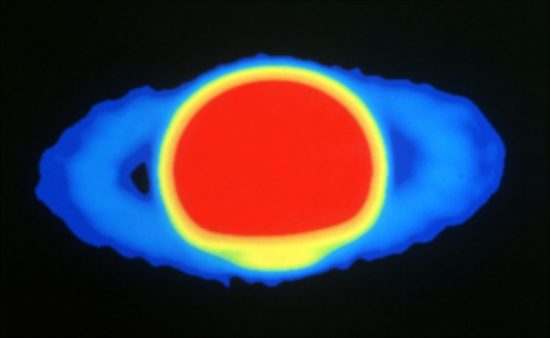 Radio image of Saturn at 2.0 centimeters and a frequency of 15.0 gigahertz. Credit: NRAO/AUI

Saturn is quite large compared to Earth; its mean equatorial diameter is about 121,000 kilometers. However, Saturn rotates so fast (10 hours, 34 minutes) that its polar diameter is 108,700 kilometers. The difference is caused by “flattening” as angular momentum pushes the low-density atmosphere outward at the equator.

The Cassini-Huygens mission (now called Cassini-Solstice) was launched from Cape Canaveral on October 15, 1997. Cassini’s twenty year mission will end in September 2017 when NASA engineers incinerate the spacecraft in Saturn’s atmosphere. Cassini’s primary mission is the exploration of the Saturnian system, including Saturn’s atmosphere, its rings, its magnetosphere and a number of its moons. It has since been discovered that Saturn’s plasmasphere is electrical in nature, with dark-mode plasma discharges and electrical arcing.

Cassini detected lightning in Saturn’s atmosphere a million times more powerful than anything on Earth. Saturn emits 2.3 times more energy than it receives from the Sun—90 megawatts of X-rays were detected surrounding the planet in a gigantic torus. That observation was not attributed to electricity, however. Instead, Saturn’s atmosphere is said to reflect X-rays from the Sun, although the intensity of the “reflections” was “surprising.” The surprise is that they ignore the fact that planets with magnetic fields can capture ionized particles to form magnetospheres. It is Saturn’s magnetosphere that traps and accelerates charged particles.

Charged particles accelerated to ultra-high energies are similar to auroral electrojets on Earth. Planets and moons are not electrically inert because they are embedded in the Sun’s circuit like the electrodes in old-fashioned vacuum tubes. The “wires” are Birkeland current filaments within the Solar System and in the plasmaspheres around planets. Saturn’s magnetic field bends around Enceladus because of electric currents generated by interactions with atmospheric particles and the magnetosphere of Saturn. Plasma jets are Birkeland currents.

Flattening of Saturn’s plasmasphere on the sunward side is due as much to an electrical connection between Saturn and the Sun as it is to the pressure of the solar wind. Cassini mission specialists ultimately reported that Saturn’s aurorae were consistent with electrical activity: “…we can see the simultaneous motion of the electric current systems connecting the magnetosphere to the atmosphere, producing the aurora.”

Electric Universe advocates contend that Saturn revolves within the solar plasmasphere and interacts with the Sun’s electric field. Since planets and moons in the Solar System are charged bodies, they are not isolated in “empty” space. Enceladus, Dione and Tethys all move within Saturn’s plasmasphere, so it is expected that they would be electrically connected with their parent. The simplest, most straightforward explanation for charged particle acceleration is electric discharge. An ultraviolet “footprint” of Enceladus was detected in Saturn’s auroral oval during Cassini’s August 2008 flyby. Ions propagating from Saturn’s northern hemisphere connected with time-variable emissions ejected by the hot spot on Enceladus’ south pole.

As Wal Thornhill wrote several years ago: “Saturn is a body that participates in an electrical discharge with its solar environment…Saturn stores electrical energy in an encircling plasmoid…Radial Birkeland currents move material out of the ring plane which then casts shadows on the bright rings to create ‘mysterious’ dark spokes.”

Cassini will be just above Saturn’s cloud tops by this time in 2017. It is expected that observations will continue to support an Electric Universe.