Home Picture of the Day Juiced Up 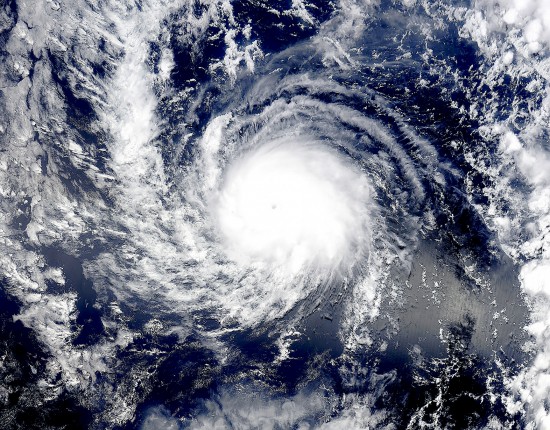 Previous Picture of the Day articles describe Earth as an electrically charged object: it maintains an electric field at its surface of between 50 and 200 volts per meter. In other words, for every meter of altitude the voltage increases. Electromagnetic fields beneath thunderstorms increase to 10,000 volts per meter because the storms and Earth act like the plates of a capacitor, storing electrical energy from the surrounding environment. An “ionic wind” of charged particles blows toward the developing storm, pulling neutral air molecules along, while creating powerful updrafts that can occasionally rise into the stratosphere. Once the accumulated charge reaches a critical threshold it is released as a lightning bolt.

Thunderstorms are a form of particle accelerator, launching massive discharges downward to the ground, as well as, surprisingly, upward to space. The upward strokes are known as red sprites and blue jets. Both are not easy to see, since they last just a few milliseconds and are at high altitude.

According to a recent press release, “gigantic jets” were detected above hurricane Hilda in early August 2015. These electric jets are similar to red sprites, often mentioned in these pages. Red sprites are massive, bright flashes seen above active thunderstorms. They are coincident with normal lightning strokes. Red sprites can be single or multiple events, with glowing filaments that often extend to 100 kilometers in altitude. The largest sprites contain many individual smaller sprites, covering horizontal distances of 50 kilometers, with a volume of 10,000 cubic kilometers.

There is another phenomenon that is also associated with thunderstorms: blue jets. Blue jets are distinct from sprites, since they propagate upward in narrow cones at altitudes approaching 50 kilometers. They are also more powerful, since the electric discharges are confined within a smaller spatial volume. Geophysicists are beginning to realize that sprites and jets are part of every moderate to large storm system and are an essential component in Earth’s electric circuit.

The electric discharges from the eye of hurricane Hilda were far more powerful than either sprites or jets. Described as “red sprites on steroids”, they are thought to release more than 30 coulombs per second of charge, or 30 amperes, at about 300,000 volts.

These phenomena are most likely manifestations of Birkeland currents pouring electricity into plasma double layers. Double layers dissipate when they accelerate particles and emit radiation, so they must be powered by external sources, such as Birkeland currents. Since scalability is one of plasma’s emergent characteristics, it reveals itself through electrical events both large and small. Nobel laureate Hannes Alfvén maintained that double layers are unique, and that intense energy sources on Earth and in space could be due to double layers “shorting out” and exploding. Double layers can accelerate charged particles up to enormous energies in a variety of frequencies, forming “plasma beams.” If the charge density becomes excessive, they explode, drawing electricity from an entire circuit, discharging more energy than was contained in the double layer.

The gigantic jets found by the Lightning Research Group in Spain are another manifestation of the connection that Earth maintains with its celestial neighborhood. Since it has been shown that Earth and space are intimately connected through electric circuits, it should be expected that more advances in detection devices will result in more discoveries. More discoveries will continue to support an Electric Universe theory.