Home Picture of the Day Old and Far Away

Old and Far Away 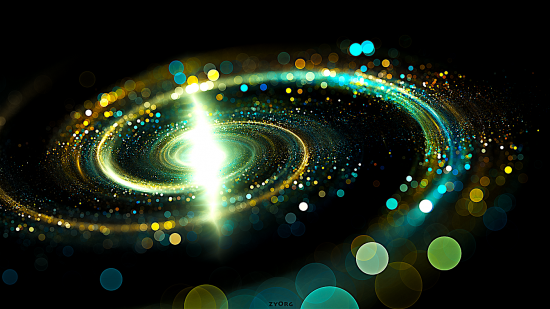 “Macro Galaxy” by zy0rg at DeviantArt

The Big Bang theory states that for some reason (not explained) an irruption of energy from some other realm replaced “nothingness” with what was to become the present Universe.

The theory was proposed because Edwin Hubble, using the recently completed 100-inch telescope at Mt. Wilson observatory, believed that he observed galaxies receding from the Milky Way. The most surprising part of his discovery was not recession itself, but the high velocities associated with his measurements: some galaxies appeared to fly away from his observatory at thousands of kilometers per second.

Adapting the Doppler effect (from Christian Doppler, who came up with the idea in 1842) to the spectra of various galaxies, Hubble thought that the change in location of particular elemental signatures called Fraunhofer lines (for the German physicist Joseph von Fraunhofer) indicated that lightwaves were shifted toward the red end of the spectrum by an apparent recessional velocity.

Fraunhofer lines are supposed to occur at specific frequencies. If they are in a different position, then they have been Doppler-shifted because of the element’s acceleration. Using this system of “redshift” some galaxies are measured to be moving away from Earth at close to 90 percent of light-speed.

The original inertia imparted to the Universe from the Big Bang is said to be responsible for the massive velocities that astronomers believe they detect. Since distance and recessional velocity are correlated with a time-scale, a galaxy that is observed at 10 billion light-years is thought to be as it was 10 billion years ago because ancient light traveled through space for 10 billion years before finally impinging on their detectors.

A recent press release announced that astronomers found the farthest object ever seen: a galaxy with a redshift of z=11. Using the formula,

an object with a z of 3.5 means a recessional velocity of 90% the speed of light. However, since the Universe is supposed to be expanding through time, other calculations, such as,

are used because that expansion factor is included. Whenever extremely high velocities are detected, astronomers believe that it is the cosmological expansion factor that is more relevant and not just raw speed. The z=11 measurement indicates that the galaxy, known as GN-z11, is traveling through time and space at an astounding 98% the speed of light.

Said Pascal Oesch of Yale University: “We’ve taken a major step back in time, beyond what we’d ever expected to be able to do with Hubble. We managed to look back in time to measure the distance to a galaxy when the Universe was only three percent of its current age.”

Marijn Franx, from the University of Leidensaid wrote: “The discovery of GN-z11 was a great surprise to us, as our earlier work had suggested that such bright galaxies should not exist so early in the Universe.”

And from Ivo Labbe, also with the University of Leiden: “The discovery of GN-z11 showed us that our knowledge about the early Universe is still very restricted. How GN-z11 was created remains somewhat of a mystery for now.”

Although many observations contradict the consensus view, and have been doing so for 40 years or more, those data are ignored or marginalized. High redshift objects, like quasars, are often found in axial alignment with galaxies that possess substantially lower redshift. Indeed, they are sometimes connected to those lower redshift galaxies by “bridges” of luminous material. If so, they must reside locally with each other at the same distance from Earth. Their redshift discrepancies must be from some other factor not related to their distances—there must be something intrinsic to their makeup that leads to the deviation.

The late astronomer Halton Arp assembled a Catalog of Discrepant Redshift Associations in which he describes anomalous structure or physical links among objects with radically different redshifts. Arp thought that the redshift measurement of quasars is composed not of a velocity value alone, but also depends on what he called “intrinsic redshift.” Intrinsic redshift is a property of matter, like mass or charge, and can change over time. According to his theory, when quasars are ejected from a parent galaxy they possess a high intrinsic redshift, z=2 or greater.

As quasars move away from their origins within galactic nuclei, their redshift properties begin to decrease until they reach somewhere near z=0.3. At that point, the quasar resembles a galaxy, albeit a small one. The inertial moment of ejection is eventually overcome and the mass of the quasar increases while the speed of ejection decreases, until it may become a companion galaxy. It is in that way that galaxies form and age, evolving from highly redshifted quasars, to small irregular galaxies, and then into larger barred spirals.

Regardless of how the Universe came into existence, or how its stars and galaxies formed, the state of affairs in modern astronomy is rapidly deteriorating into theoretical fantasies that can no longer support the observations.