Home Picture of the Day A New View 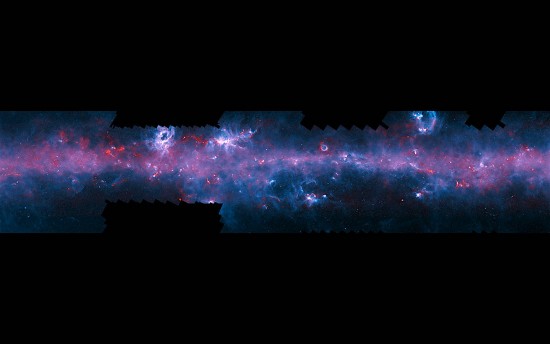 Looking toward the center of the Milky Way in the 870 µm wavelength (red). Shorter frequencies (24 µm and 8 µm) shown in blue and green are taken from Spitzer Space Telescope and Planck Space Telescope data. Credit: ESO/APEX/ATLASGAL consortium/NASA/GLIMPSE consortium/ESA/Planck

A recent press release announces the first results obtained from a survey of the Southern sky in sub-millimeter wavelengths. Long wavelength radiation is also known as infrared. Most astronomical investigations focus on the infrared ranges extending from about 8 µm to 900 µm. This allows their detectors to “see through” obscuring clouds of dust.

According to Timea Csengeri from the Max Planck Institute for Radio Astronomy: “ATLASGAL provides exciting insights into where the next generation of high-mass stars and clusters form.”

Star formation theory was proposed in 1755 by the German philosopher Immanuel Kant, who thought that the Sun and planets originally condensed out of a cloud of dust and gas floating in space. Over eons of time, gravitational attraction between particles caused them to clump into larger and larger lumps. Each lump became the center of even greater attractive force, drawing them all together and causing them to cluster into a mass. The mass gradually attained so much gravity that it squeezed the gases and dust down into a small, hot ball. As the ball became hotter and began to rotate from the angular momentum contained in the original cloud, it attracted more and more material into its mounting gravitational field, until finally igniting in a nuclear fusion reaction.

Modern additions to the theory suggest that shock waves from “stellar winds” generated by supernovae ram through star-forming regions, compressing dust and gas along a shock front and “jump-starting” star formation. How stellar winds blow through space until they encounter a nebular cloud is not known, however. Another problem associated with nebular star formation is that shock-heated gases should dissipate from their increased molecular movement, not collapse. Gravity is far too weak to hold thin, hot clouds of gas together.

Since gravity is a weak force, for a gas cloud to collapse under its own weight it has to be cool and possess no magnetic fields, otherwise it will dissipate. However, in the so-called “stellar nurseries” that are observed, new stars are always embedded in chaotic regions of hot dust, energized plasma, and magnetic fields. It is only with an electric star theory that a dichotomy such as that can be resolved.

Indeed, Electric Star theory proposes that stars are born from plasma and electric fields in space. Instead of kinetic effects, nebulae are powered by electricity. Electric power density in dusty plasma is greatest along the axes of Birkeland current filaments. That current produces an electromagnetic field that draws matter to the filaments from surrounding space more strongly and from a greater volume than is possible with gravity. When sufficient matter accumulates in the filaments they begin to glow. Stars are born along the filaments (like beads on a string) in those displays of electromagnetism.