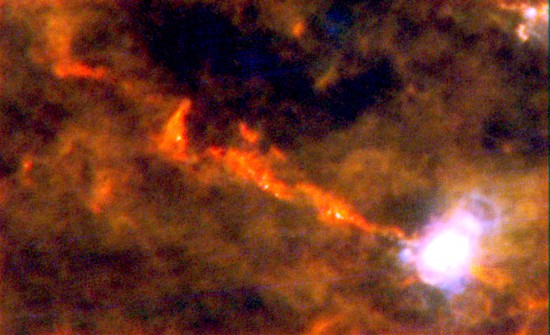 Braided filaments stitch the Universe together.

The Herschel Space Observatory was launched on May 14, 2009 into an orbit around LaGrange point L2 (behind Earth in relation to the Sun). Herschel’s supercooled infrared detectors were built to last only three years, so its cooling system has long since failed.

The only way for astronomers to see stars (or galaxies) inside dusty environments is to view them in infrared light. Giant molecular clouds are studied using a variety of techniques, especially various frequencies of infrared radiation, since interstellar matter glows at long wavelengths.

According to Electric Universe theory, galactic evolution occurs as large-scale plasma discharges form coherent filaments that are influenced by electromagnetism. Gravity certainly contributes to the behavior of star clusters and galaxies but it is not the primary energy source for their consolidation.

Stars can form like silver beads on a string, threading through galaxies for great distances. The filamentary nature of the cosmos was one of Herschel’s most important contributions to the study of plasma phenomena in space. When plasma moves through a cloud of dust and gas, the cloud becomes ionized, initiating an electric field and the flow of electric charge. Electricity moving through any substance forms magnetic fields that tend to align and constrict the current flow. Those fields create what are known as Birkeland currents.

“The greatest surprise was the ubiquity of filaments in these nearby clouds and their intimate connection with star formation.”

Birkeland current filaments carry electric charges through space. They isolate regions of opposite charge and prevent them from neutralizing. Almost every body in the Universe displays some kind of filamentation. Planetary nebulae form elaborate webs of tendrils; Herbig-Haro stars and energetic galaxies emit braided jets.

Since the various loads in galactic circuits radiate energy, they must be powered by coupling with larger circuits. How large those circuits are is not known. However, since galaxies, like stars, can also occur in strings, and are joined together by filaments, it seems as if their proportions are truly universal.

“…these observations revealed that filaments, which may extend to several light-years in length, appear to have a universal width of about one third of a light year. This suggests that something fundamental is lurking underneath.”

Presumptions are difficult to overcome, particularly when they represent the pinnacle of thought within scientific disciplines. The inability of consensus researchers to understand many factors restricts their grasp of fundamentals when it comes to the nature of the Universe. While astrophysicists only permit isolated galactic “islands” in their lexicons, Electric Universe theory emphasizes connectivity with a vast network of electrically active “transmission lines.” That spatial wiring is composed of the aforementioned Birkeland currents.

Astronomer Halton Arp’s work revealed that there are connections between high-redshift objects (supposedly far away) and low-redshift galaxies. Since distant objects are really companions of nearby galaxies, then what is visible outside the Milky Way is part of a thread-like galactic grouping. Birkeland current filaments millions of light years thick and billions of light years long, out of which groups of galaxies are “pinched”, raise the possibility that the entire visible Universe is one vast helix extending from the Virgo supercluster to the Fornax supercluster across billions of light years.