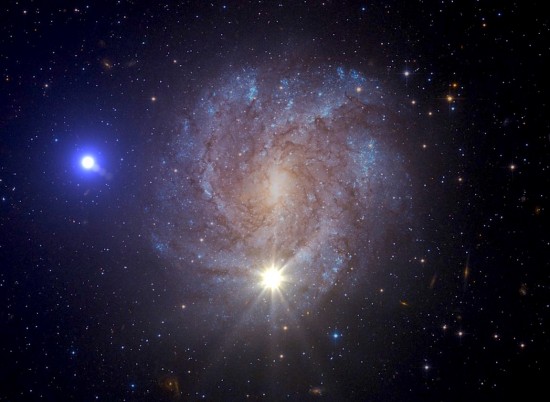 Artist’s conception of a “hyper-velocity star” being ejected from a galaxy. Credit: ESA/Hubble, NASA.

Modern astronomical models of cosmic evolution rely on the kinetic effects of cold gas collapsing from gravitational forces. Clouds of gas and dust a thousand times less dense than a puff of smoke are said to be compressed into a region of high density that then draws even more material into the center of the zone. Eventually, molecules within the cloud are squeezed so tightly that nuclear fusion reactions occur.

Consensus opinions state that extremely massive stars live fast and die young. They “fuse” their hydrogen and helium into heavier elements that, in turn, fuse into elements that are heavier still. In their senescence, the radiative emissions from such stars are thought to be so intense that gravity can no longer confine their energies and they “blow away” enormous quantities of stellar material in a supernova explosion. In some cases, they lose mass up to a million times faster than our own Sun. However, that process is highly speculative.

According to a recent press release, Eugene Magnier, using the 10-meter Keck II and Pan-STARRS1 telescopes in Hawaii, discovered a star called US 708 traveling at approximately 4.5 million kilometers per hour. That velocity suggests that the star might escape from the Milky Way’s gravitational influence. Why is the star moving so fast? Astronomers think a supernova explosion provided the impetus for US 708’s acceleration.

The problem with determining velocity at that distance (62,000 light-years) is not the topic of this paper. However, in an Electric Universe, redshift (Doppler frequency shifting of light due to velocity) is not a reliable indicator of speed or distance.

Previous Picture of the Day articles point out that stars are not simplistic balls of gravitationally compressed hot gas, they are composed of plasma. Plasma is ionized, meaning that one or more electrons are stripped from the atoms in its substance, so it is electrically charged. Plasma does not behave like a pressurized gas, it behaves according to the tenets of plasma physics. Plasma can be accelerated and steered by electromagnetic fields.

Plasma is not a “substance”, per se, it is an emergent phenomenon; it can not be analyzed in terms of its component parts, it arises in response to complicated interactions. Such properties as filamentation, long-range attraction and short-range repulsion, braiding, characteristic velocities, formation and decay of plasmoids, and identity of properties at different scales are all aspects of the plasma phenomenon.

As previously written, laboratory experiments confirm that electricity flowing through plasma forms regions separated by thin walls of opposite charge called double layers. This is the “charge separation” so often mentioned in these pages. Could charge separation be the foundation for the electrical explosions known as supernovae?

Electric Universe theory agrees with conventional astrophysics in that a supernova can be referred to as an “exploding star.” However, that explosion is due to the breakdown of double layers and not end-game fusion processes. Stars are powered from external currents of electric charge flowing through vast circuits in space. Rather than “core rebound” or “white dwarf accretion,” supernovae are the result of a stellar “circuit breaker”, where the stored electromagnetic energy in the circuit is suddenly focused at one point. When a star’s double layer explodes, the electromagnetic energy stored in a vast galactic circuit flows into the explosion.

Electric Universe advocate Wal Thornhill wrote: “The conventional ‘implosion followed by explosion’ model has many shortcomings…A star also has electromagnetic energy stored in an equatorial current ring. Matter is ejected equatorially by discharges between the current ring and the star…if the stored energy reaches some critical value it may be released in the form of a bipolar discharge, or ejection of matter, along the rotational axis.”

Since stars can be thought of as the foci for immense energies from the galaxies in which they live, their activities cannot be based on whether they possess a certain mass. Instead, they are externally powered objects: they are bodies formed electromagnetically where gigantic plasma filaments have squeezed matter in what is called a “z-pinch.” Electric fields are where the seeds of supernovae are planted.