Home Picture of the Day Electric Baubles in the Night

Electric Baubles in the Night 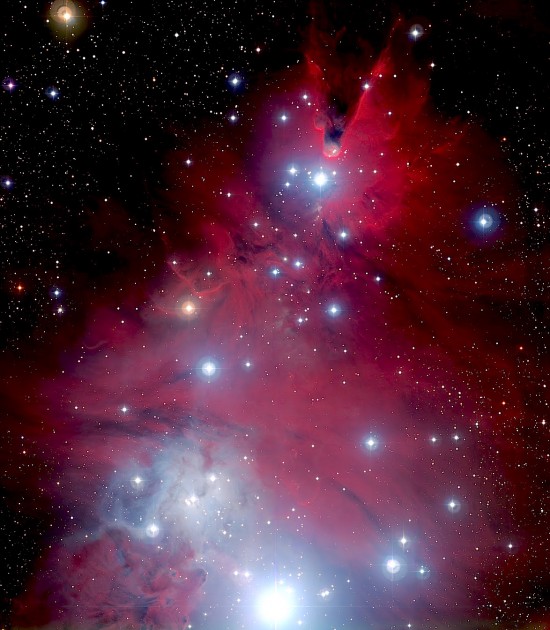 Editor’s Note: The Picture of the Day will be enjoying a brief hiatus over the holidays, returning December 28.

Lights on a Christmas tree depend on electric power. So do the lights in space.

The Christmas Tree cluster contains about 40 stars and lies in the constellation Monoceros, along with the Cone Nebula. Both were discovered by William Herschel between 1783 and 1786, although the Cone Nebula was named by L. S. Copeland. One of the most interesting features in the nebula is the fir tree-shape extending upward from the bottom of the image shown above. It appears to be crowned with a blazing ornamental star at its apex.

The gases and dust making up the general structure of the nebula are lit by the ultraviolet light being emitted by the “hot, young stars” that make up the cluster. As is commonly thought by astronomers, hot gas is supposed to radiate ultraviolet light—it must be so since the idea of electricity lightning up the stars just like the string of lights on a Christmas Tree is foreign to conventional understanding.

Many nebulae are labeled “star-forming regions” because stellar ignition is dependent on condensation out of a cloud of molecular gas and dust. Most astronomers assume that a shock wave of some kind is necessary for the cloud to collapse. Supernova blasts are said to begin the initial collapse and to “seed” the region with larger clumps that will cause more dust to be attracted to them, as well.

NGC 2264 is another story told about the birth and death of stars in the womb of gravity and inertia, but key ingredients are missing from the mix. Where is electricity and the electromagnetic wave guides needed to power the stars? Both are ignored in favor of thermonuclear fusion reactions taking place in the super-compressed hydrogen cores of new stars. However, why does the heated gas collapse instead of dissipating, as thermodynamic physics would insist?

The Electric Universe theory relates a more reasonable account. Instead of “hot gas and compressed dust,” it is plasma and magnetic fields that form the electric stars. Birkeland currents power the galaxy and prevent plasma from dispersing inside their multi-light-year-long helical coils. When the electric current density inside the filaments gets high enough, the plasma that carries the current begins to glow and to “pinch” into plasmoids that eventually become the stars.

When the electrical stress is low and the plasma contains a lower concentration of dust, only the stars in a nebula “light up” in arc-mode discharge. Where the electrical stress is greater, as in the Christmas Tree cluster, curling filaments, jets, and the surrounding “gas” clouds can also light up. Of course, dust clouds can reflect the light from nearby stars, but NGC 2264 illustrates the characteristic filaments and cell-like behavior seen in plasma laboratory experiments.

The light in the nebula is produced by electrical discharge, so it is not unusual for ultraviolet and even x-rays to be generated by the intensity of the stellar arcs. The correct understanding is that a nebula is a laboratory “gas-discharge tube,” similar to a neon light, which emits light due to the electrical excitation of the gas. So it seems that both the Christmas Tree in the living room and the Christmas Tree cluster operate in very similar ways: both are plugged-in to an electrical circuit.