Home Picture of the Day Ouranos 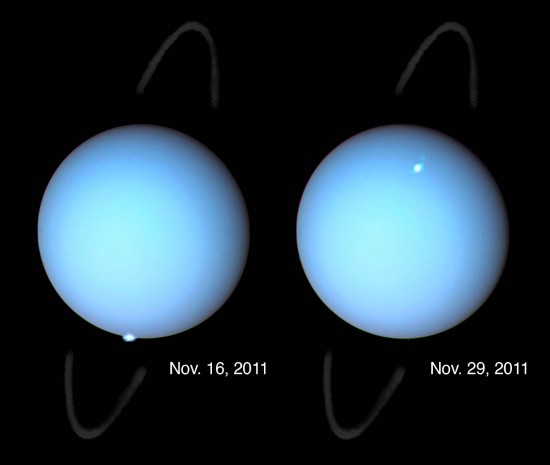 Uranus is 50,724 kilometers in diameter at the equator, although its equator is tilted almost 90 degrees past horizontal when compared to other planets in the Solar System. Most of them are tilted no more than 24 degrees past vertical, but Uranus rotates on its side.

Since Uranus takes 84.3 Earth years to revolve, telescopes have had less time than that to investigate its surface and surroundings. For example, the Keck telescope in Hawaii achieved first light on November 24, 1990. Its first use of adaptive optics did not take place until October 2003. Before that, detailed observations from Earth were impossible because of atmospheric distortion.

The Hubble Space Telescope is also used to explore the outer planets. Hubble did not begin to observe Uranus until around 1998. It was the Hubble telescope that discovered aurorae on Uranus, a surprise to planetary scientists. Since the magnetic field on Uranus is inclined by 59 degrees from its spin axis, aurorae are not near the planet’s poles. The only other close-up image of Uranus came from the Voyager 2 spacecraft that flew by on January 24, 1986 at a distance of 81800 kilometers. So, there has not been sufficient technology to see even one year’s seasonal changes on Uranus.

Uranus, like the other gas giant planets, is subject to gigantic storms that seem to appear from nowhere. Why they occur is a mystery to scientists, but they appear to be similar to storms that are seen on Jupiter and Saturn. Like the other gas giants, Uranus radiates more energy than it receives from the Sun. Saturn, for instance, radiates 2.3 times more infrared than reflection of solar radiation off its cloud tops can explain, while Uranus emits 1.1 times more radiant energy.

With an average temperature of -214 Celsius, it is difficult for those interested in climate among the planets to account for the 585 kilometer per hour wind speeds on Uranus. It is most likely that the anomalous winds, the aurorae, and the faint ring system are caused by processes that Electric Universe advocates see throughout the cosmos.

On Saturn, a “mysterious dragon storm” periodically erupts from below the clouds, subsequently making its way around the entire planet. Jupiter’s Great Red Spot is hotter than its surroundings and has been spinning through its atmosphere for more than 300 years. In each case, the power needed to drive those phenomena comes from electricity.

Like Saturn and Jupiter, Uranus could be thought of as a solar system in its own right, with a family of 27 moons. It possesses a Langmuir charge sheath (plasmasphere) that isolates it from the Sun’s own charge sheath that, in turn, is isolating it from the charged interstellar medium. Its interaction with the flow of electric charge in the Solar System can explain the effects discovered by astronomers on Uranus.

Perhaps, like the Sun, there are other factors that link its explosive discharges with electrical connectivity. Like its sisters, the environment around Uranus is highly charged. Could objects traveling through its vicinity, like its larger moons, initiate substantial electrical events in the same way that sungrazer comets do?

Presuming Uranus to be a highly charged object in a state of dynamic equilibrium, it is possible that one or more of its moons are connected to it in the same way that Io is connected to Jupiter with powerful “flux ropes”. Those connections will strengthen as the solar wind adds greater charge density to each body. As time goes on, with more detailed and more prolonged observations, those questions ought to confirm the Electric Universe model of the Solar System.