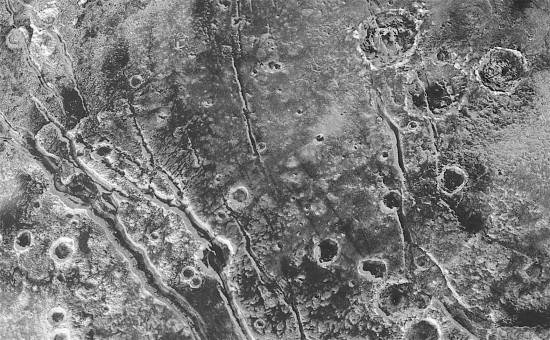 The Kuiper Belt theory was developed by Kenneth Edgeworth, an astronomer from Ireland, and also (separately) by American astronomer Gerard Kuiper in 1951. The first Kuiper Belt Object (KBO) was discovered in 1992, and is commonly referred to as “QB1”. Dozens of KBOs the size of moon-sized planets are discovered every year. Because of Pluto’s size, distance, and orbital eccentricity it is also a Kuiper Belt Object. Other KBOs include the dwarf planet, Eris (2003 UB313), as well as over 70,000 “Trans-Neptunian Objects” (TNO).

Pluto’s mean distance from the Sun varies due to a highly eccentric orbit. Aphelion takes it out as far as 7.3 billion kilometers, while perihelion brings it no closer to the Sun than 4.4 billion kilometers, which means it takes about 248 years for it to complete one revolution, longer than telescopes have been able to observe it. To put the figure in perspective, the last time Pluto was in the same place in its orbit as it is now was before the American war for independence in 1776.

Dwarf planets are part of the TNO designation, although they are in a subclass by themselves. In 2006, a vote was cast at a meeting of astronomers that classified various celestial bodies. According to the vote, a planet is a celestial body that orbits the Sun, has a nearly round shape, and has “cleared” its orbit of extraneous debris. Another classification, “dwarf planet” is essentially something that looks like a planet but is not a planet. Pluto is now considered a dwarf planet, as is the asteroid Ceres. Along with the aforementioned Eris, Haumea, Makemake, Sedna, Quaoar, and Orcus are also considered to be dwarf planets. Pluto’s moon Charon would also fit if it were not a moon.

The Nebular Hypothesis suggests that the Solar System condensed out of a cloud of molecular gases and dust billions of years ago. Eventually, the dust and gas shrank to the point where compression started a nuclear chain reaction in the dense ball of hydrogen and helium at the center of the cloud, giving birth to a new star and a ring of dust and gas. According to cosmologists, during that phase, “eddies” of matter formed in the ring, which grew larger, attracting more material into them, until impacts from nebular condensates in the hundreds of millions gradually formed the planets. Therefore, the planets are probably in the places they were at the beginning of their formation.

In a plasma cosmogony hypothesis, the stars are formed when cosmic Birkeland currents twist around one another, creating z-pinch regions that compress plasma into a solid-like condition. Laboratory experiments show that such z-pinches are the most likely candidates for star formation and not collapsing nebulae. When stars are born, they are probably under extreme electrical stress. In that case, they will split into two or more daughter stars, thereby equalizing their electrical potential.

As Wal Thornhill wrote: “The fission process is repeated in further electrical disturbances by flaring red dwarfs and gas giant planets ejecting rocky and icy planets, moons, comets, asteroids and meteorites. Planetary systems may also be acquired over time by electrical capture of independent interstellar bodies such as dim brown dwarf stars. That seems the best explanation for our ‘fruit salad’ of a solar system.”

Electric Universe theorists expected New Horizons to falsify the Nebular Hypothesis again, as it has in the past. 99% of the Universe is plasma, so the conclusions derived from the hypothesis are not connected with real observations.

Pluto resembles its sister moons and dwarf planets. There are areas where ripples and “cantaloupe” terrain dominate. There are steep-walled craters with flat floors, hexagons, thousand-kilometer trenches, hectares of pits, craters on the rims of other craters, and other features that mark Pluto as an electrically devastated world.