Home Picture of the Day That Old Black Magic 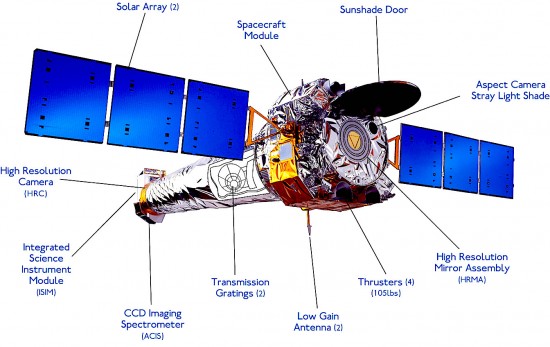 Near-infinite density is not logical in three-dimensional space.

A special press conference was called on November 15, 2010 in order to announce the discovery of “the youngest black hole ever detected.” The object (SN1979C) was identified by bright X-ray emissions that have not varied in output for more than five years. Astronomers believe that the radiation’s steady state indicates that material is being superheated as it falls into the black hole’s event horizon.

The black hole in M100, or “the Grand Design Galaxy”, is said to exist because stars more than five times the Sun’s mass can “explode”, leaving behind compacted remains that can attain near-infinite density in a zero volume. There are at least three ideas in that conclusion to which Electric Universe advocates would object.

First, what is a supernova? Previous Pictures of the Day argue that stars do not age and die in the way that conventional understanding proposes. Stars are not globes of hot gas under pressure, they are plasma phenomena. Plasma is ionized and is electrically charged. Since it is ionized, it does not behave like a pressurized gas, so gravitational instabilities are not sufficient when it comes to explaining stellar births and deaths.

As Electric Universe theory states, a supernova is an exploding star, but not in the conventional sense. Instead, it is the explosion of a double layer in plasma. The power comes from external electric charge flowing through vast circuits in space, so the radiation from stars is due to discharges that vary in strength. It is those electric arcs that make up stellar coronae, chromospheres and photospheres.

Meanwhile, astrophysicists, untrained in the physics of double layers, treat supernovae remnants as a problem in fluid dynamics, using mechanical shockwaves and gravitational pressure to provide the observed energies. It is an approach that is doomed to fail, as Hannes Alfvén warned.

Supernovae are the result of a stellar “open circuit” in the galactic power supply, similar to open high-voltage switches, with extensive arcing.

In an exploding double layer, the energy from an entire galactic circuit might flow into the explosion, increasing its expansion far from the surface of the star. Indeed, supernovae are so bright they outshine the galaxies in which they’re found. Radiation from the double layer is detected in extreme ultraviolet or X-ray wavelengths, sometimes gamma rays. It is those effects that should be considered in the case of SN1979C.

Second, what is a black hole? Black holes are supposed to twist space and time so that velocity calculations yield impossible solutions. Matter inside a black hole occupies no volume, yet retains gravitational acceleration so powerful that light cannot escape—it is, therefore, “black”.

Several Picture of the Day discussions about black holes explain that the language used by astrophysicists is problematic, relying on highly speculative explanations. Ambiguous lexical labels, such as space/time, multiple universes, singularities, infinite density, and other ideas that are not quantifiable make a realistic investigation ironic.

Matter falling into a black hole is supposed to be accelerated and subsequently compressed. It first orbits the black hole at a faster and faster rate, getting closer to a tiny point that is several times the mass of the Sun. X-rays and ultraviolet light emissions are interpreted by astronomers as gas heating up from atomic collisions in the rotating disc.

Third, hot gas, no matter how fast it moves, is not the principal cause of X-rays. Laboratory experiments produce them by accelerating charged particles with an electric field. No gigantic masses are necessary.

There is no evidence to support the idea that matter can be compressed to near-infinite density. Rather, it is z-pinches in plasma filaments forming plasmoids and double layers. Electricity is responsible for stars, and when a stellar circuit catastrophically releases its excess energy, it appears as X-rays or flares of ultraviolet light.

Classical understanding of electromagnetism reveals that it is more than able to create celestial phenomena, without recourse to the black magic of black holes.