Home Picture of the Day On the Dunes 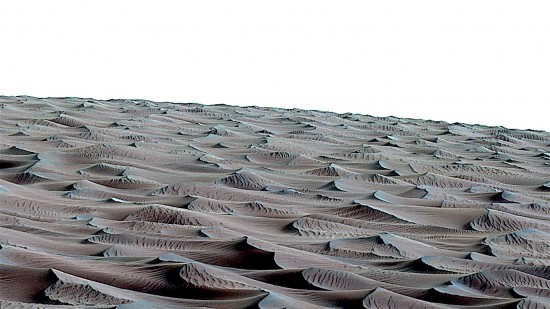 Recently, the Mars Science Laboratory (MSL) known as “Curiosity” arrived at a vast dune field in Gale Crater. Curiosity was launched on November 26, 2011 on a two-year mission. However, in December 2012 its sojourn on Mars was extended indefinitely.

It is assumed that sand dunes on Earth are created when wind and rain erode rocks over eons of time, providing the sedimentary dust particles necessary for deserts like those in Namibia, to form. High winds are also needed to lift and carry the sediment, eventually piling it up in drifts. Sand dunes on Earth are normally seen to move across the landscape through wind action. Enormous volumes of soil, in the millions of tons, are transported around the planet every year because of weather patterns.

When planetary scientists find sand dunes on other planets, the natural assumption is that similar activity created similar formations. In other words, if dunes are formed by actions common on Earth, those same actions must be affecting their creation elsewhere. Although the Martian environment is not conducive to Earth-like erosion, the landforms are so much alike that mission specialists believe that Mars was once capable of sustaining winds and rain.

Sand dunes and ripples do not move around Mars, at least as far as any observations can demonstrate. From the time of the Viking orbiter until the HiRise camera system, no dunes have been seen to move at all despite several planet-wide dust storms. Some research has suggested that a small dune on Mars might take more than a thousand years to move a meter. This is due to the low pressure of the Martian atmosphere—there is not enough force to push the particles.

In fact, some dune formations on Mars appear to be frozen in place with a crusty surface that looks as if it has been eroded. Electrical theorists predict that the more scientists learn about these formations the less plausible the traditional explanations will become. It was unfortunate that a landing mishap damaged the wind sensors on Curiosity.

Most formative processes on Mars seem to bear little actual resemblance to textbook geology. The lack of movement and the hardness of the dunes suggests that they were solidified and have remained in place since they were initially formed. In other words, they were glassified and fused together into immobile structures while retaining the appearance of loosely piled sand. Cathode sputtering and subsequent electrical deposition of the finely divided material onto oppositely charged regions across the surface could explain the ersatz dunes.

There is also the fractal-like reduction in scale when considering ripples and dunes. Even small dune “tendrils” have smaller ripples. Dune crests like those in Gale crater can be 100 meters high, while the tendrils are no more than ten centimeters but with the same morphology. What aeolian process can account for this progressive fractal reduction in scale? In electrical terms this is no anomaly since plasma discharges are scalar across many orders of magnitude.

NASA scientists often refer to what they find on Mars as “mysterious” or “puzzling”. The reason for the confusion is the problem of reverse application. Earth should not be used to explain the Solar System. The geological patterns found elsewhere deserve alternative viewpoints. The entire issue of Martian ripples is a case in point.