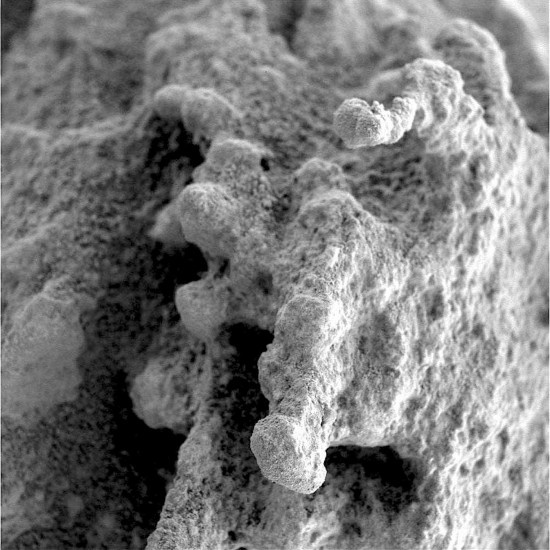 A recent conference about the possibility of water on Mars shifted the focus, somewhat. Rather than concentrating on open water or deposits of ice in the remote past, researchers now think that water vapor might have eroded some of the rocks on Mars. Experiments with sulfuric and hydrochloric acids suggest that Martian basalts interacted with an “acid fog” on the surface, creating poorly consolidated crystallinity.

The Mars Exploration Rover (MER) Spirit, while traversing the Columbia Hills in Gusev crater, examined some outcrops that exhibited “knobby protuberances”. Planetary scientists propose that they are “agglomerations of preexisting grains, formed from the interaction of acid fog and the host rock.” The process is said to form “…a gel, which desiccated as the adsorbed water evaporated.” That is why the knobs are sometimes found on the ends of chalk-like “stems”. Since Mars is now a barren wasteland of rocks and dust, it is assumed that the water evaporated more than a billion years ago.

The Mars Global Surveyor’s (MGS) high resolution camera, known as HiRise, continues to send images that suggest layered rock extending for thousands of kilometers through Schiaparelli Basin and out into Valles Marineris. The layers with similar thickness prompted NASA scientists to conclude that the strata in Schiaparelli Basin is actually sedimentary: built-up in water and then eroded by wind. In fact, Schiaparelli Basin was considered as a landing site for Spirit. The rover was sent to Gusev crater because it has the appearance of a lake that once drained through a deep channel, so it was hoped that sediments would be found. Mars investigators were disappointed with the findings in Gusev, however.

Several Mars missions sought, and are seeking, confirmation for the existence of water in some form or another on the Red Planet. There were reports of clouds and low-lying fog—and the Phoenix polar lander is reputed to have detected water just below the surface—but nothing definitive. For example, although the now defunct Phoenix lander reported visual evidence for water, the probes used to test for water in the soil returned a null reading. The soil was nonconductive, indicating no water molecules.

According to a relatively recent press release, though, Curiosity found what seems to be “an ancient stream bed in Gale Crater”. The reason they refer to it as a stream bed is due to the rock slabs that contain a conglomeration of more knobby protuberances of hematite.

As nearly every consensus presentation about Mars insists, the planet must have gone through a stage when there were oceans of water on the surface. The concept implies that Mars once retained an atmosphere dense enough in oxygen (and a moderating gas) so that life could live in the open.

In previous Pictures of the Day about Mars, it was noted that, in an Electric Universe, powerful electric arcs once impacted the surface. The energy released by those discharges created sinuous rilles, flat-floored craters, “railroad track” patterns in canyons and craters, intersecting gullies with no debris inside them, giant mesas with Lichtenberg “cathode whiskers” and steep-sided ravines wending through landscapes dotted with circular uplifts.

Martian topography is not rounded or softened as if by a flood. It does not conform to slow weathering by rainfall or blowing dust. The formations on Mars are sharp, angular and fresh looking, as if sculpted quickly and with tremendous force. The northern latitudes, in particular, are effaced.

Electric Universe theorist Wal Thornhill wrote that the northern region of Mars was electrically sputtered. Something removed millions of square kilometers out of its crust, redistributing the regolith as finely divided dust all over the rest of the planet, as well as hurling it into space. Such an event would eliminate any water-based formations, since the majority of Mars was catastrophically resurfaced.