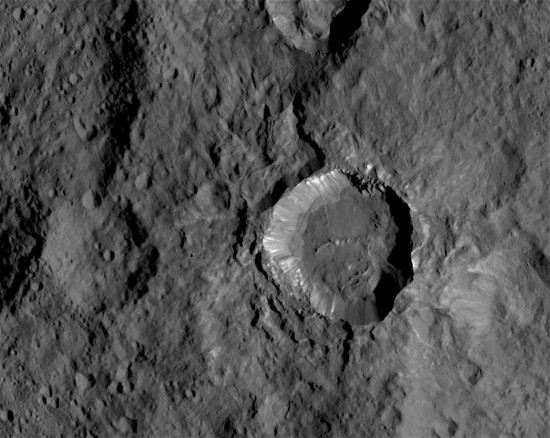 The dwarf planet Ceres shares many characteristics with other rocky bodies.

NASA launched the Dawn spacecraft on September 27, 2007. Its scientific observations of the asteroid Vesta began on July 17, 2011 and ended on September 5, 2012 when Dawn fired-up its ion thruster engine and headed toward Ceres.

The Hubble Space Telescope measured Ceres at 975 kilometers in mean diameter, but Dawn’s closeup view reduced that figure to 950 kilometers. It is roughly spherical, and is now considered to be a dwarf planet, along with Pluto and several recently discovered Trans-Neptunian Objects like Sedna.

Ceres is about as large as Saturn’s moons Tethys (1072 kilometers) and Dione (1120 kilometers). Since its size and density are similar to those objects, its features are similar. Based on Dawn’s analysis, and gravitational perturbations on other asteroids like Pallas, its density is 2.08 g/cm³, meaning that it should be covered with a thick ice layer. There might also be a layer of silicate rock beneath the ice, since its sister, Vesta, is primarily composed of silicates. Ceres also compares with Pluto’s density measurement of 1.88 g/cm³.

One of the most interesting features on Ceres is the crater, Occator, meaning, “he who harrows”. Occator was associated with the goddess Ceres in ancient mythology because Ceres was a Roman goddess of farming and agriculture. Occator is a rather large crater, approximately 90 kilometers wide and four kilometers deep. However, what is most intriguing is the large, bright mound and surrounding bright patches inside the crater.

One thing to consider when looking at these features on Ceres is that the vast majority (if not all) craters on its surface appear to be aligned with its center of gravity. They have flat floors; scalloped edges; vertical sidewalls (see the image at the top of the page); craters on the rims of other craters; hexagonal formations; and crater chains. The alignment is an absurd configuration, since it implies that all the objects that struck Ceres impacted at 90 degrees to its surface.

Another feature that can be found on various rocky bodies is what is known as a “fulgamite”: a mounded circular formation that appears to be melted and raised above the surrounding terrain. The most famous fulgamite in the Solar System would be the Olympus Mons structure on Mars, a gigantic mound most often referred to as a volcano.

Olympus Mons has all the characteristics of a fulgamite. It is covered with raised dendritic ridges flowing up its sides like hardened Lichtenberg figures. The caldera chiseled out of its summit is unlike the volcanic vents found anywhere on Earth. The mounds in Occator crater reveals the same aspects: they are isolated structures, particularly the central formation, which is brighter than the surrounding regolith.

There is another bright mound on Ceres, with anomalous characteristics, and that is “the lonely mountain”, described by NASA scientists as, “…sharply defined, with almost no accumulated debris at the base of the brightly streaked slope…” and mysterious. If the aforementioned electrical effects are considered, the mystery of its creation might be explained with more coherence.

Many Pictures of the Day argue that the majority of craters in the Solar System are the result of massive electrical discharges from a presumed source in the recent past that is no longer active. Some other charged body (or bodies) catastrophically interacted with each other, leaving the Sun’s family burned, blasted, and scarred.

The mounds on Ceres, the crater anomalies, the bright material, the rilles wending their way through its topography, and the tall peaks in the centers of some craters leave only one conclusion: Ceres is another electrically disfigured world.