Home Picture of the Day Flash in the Pan

Flash in the Pan 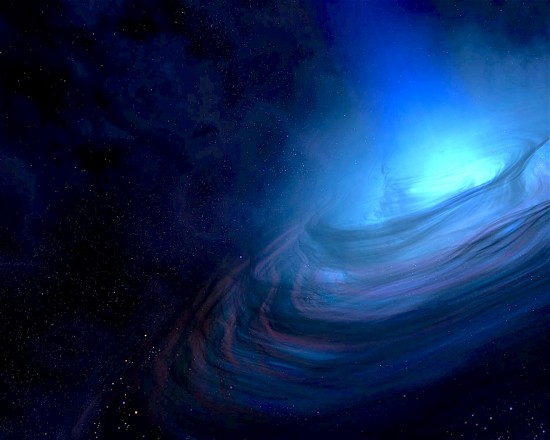 NASA’s Nuclear Spectroscopic Telescope Array (NuSTAR) was launched aboard a Pegasus rocket on June 13, 2012 from a NASA L1011 aircraft. According to a recent press release, NuSTAR captured images of a so-called “supermassive black hole” (SMBH) erupting with a powerful X-ray flare in a galaxy over 300 million light-years from Earth.

Known as Markarian 335 (Mrk 335), it is thought to be one of the most powerful galactic X-ray emitters, with 10 million times the mass of the Sun in a diameter of 30 million kilometers, or ten times its width.

Said Michael Parker of the Institute of Astronomy in Cambridge:

“The corona recently collapsed in toward the black hole, with the result that the black hole’s intense gravity pulled all the light down onto its surrounding disk, where material is spiraling inward.”

The corona is thought to be composed of high frequency electrons suspended over Mrk 335’s accretion disk. The energetic electron cloud is said to impart a “kick” to ultraviolet photons ejected from the disk, increasing their wavelengths into the X-ray spectrum. The X-rays “…reflect back off the accretion disk…” and provide a way to analyze Mrk 335’s spectrum. Since there are “relativistic” observations of the electron cloud, astronomers believe that they are witnessing effects predicted by the general theory of relativity, although such a phenomenon is almost impossible to measure.

NuSTAR principal investigator Fiona Harrison wrote: “…we can’t paint a dot on the event horizon and clock how long it takes to orbit the black hole. But we can understand spin in terms of how the black hole’s gravity twists spacetime around it as it rotates. If you were standing near the event horizon of this particular black hole, because your spacetime is twisting, you would be turning around once every 4 minutes just to stand still.”

Irony aside, as written many times in previous Pictures of the Day, and as detailed by the Tasmanian mathematician Stephen Crothers, black holes are an inferred phenomenon; they cannot be detected by any instrument.

It is an assumption that matter can be accelerated and compressed by a black hole’s gravity until the “event horizon” draws it down into oblivion. That idea is the foundation for most conventional ideas about how galaxies behave, since it is assumed that 98% of them all contain a supermassive black hole. That theory demands gravity as the dominant force in the Universe. Anomalous data is always forced into that theoretical framework or is consigned to the “mysterious” realm; such that scientific papers are filled with the common refrain of “puzzlement” and “unexpected results”.

Flares from galaxies are thought to be caused by stars torn apart by tidal forces, or “rotational energy”. Most of the gas and dust escapes, but some is captured by the SMBH and forms a rotating disk. Closer to the black hole, heat generated by molecular collisions tears atoms apart and the disk glows in extreme ultraviolet and X-rays. This is what is referred to as a black hole’s “corona”.

No direct evidence exists for matter compressed to nearly infinite density. Instead, it is Z-pinches in plasma filaments forming plasmoids that energize stars and galaxies. When charge density is too high, double layers form, catastrophically releasing their excess energy in bursts of X-rays or flares of ultraviolet light.

That electric charge flow in plasma generates magnetic fields that constrict the current channel. Pinched electric filaments remain coherent over long distances, spiraling around each other, and forming helical structures that can transmit power through space. Those filaments are the jets seen in galaxies and stars.

No gigantic masses compressed into tiny volumes are necessary, and those flares and jets are easily generated with the proper experimental equipment. There are other factors that should be considered when analyzing observational data before resorting to super-dense objects and other fantastical ideas. It could be that there are lightning flashes taking place in the center of Markarian 335.