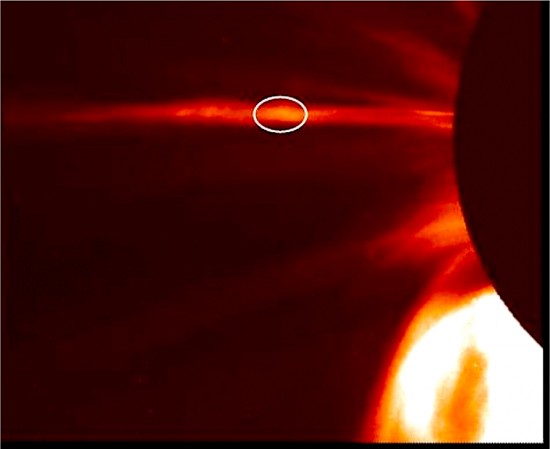 Plasmoid observed in a solar filament on January 9, 2002 by the Large Angle and Spectrometric Coronagraph Experiment (LASCO). Credit: ESA/NASA

Ionized particles from the Sun constitute the solar wind.

In an electric Universe, plasma discharges are a better model for solar activity than the consensus community likes to accept. Experiments using a positively charged sphere show that a plasma torus forms above the sphere’s circumference. Charged particles couple the sphere’s middle and lower latitudes, similar to “anode tufting,” a plasma phenomenon expected from a positively charged electric Sun.

Since the Sun is the most powerful electrical entity in the Solar System, it stands to reason that its influence will extend outward as far as its heliospheric boundary. The solar wind, a stream of charged particles radiated by the Sun, accelerates through the Solar System, yet is poorly understood by heliophysicists.

A recent press release ignores the primary electrical aspect of the Sun, preferring to focus on kinetic effects in an attempt to explain the solar wind anomalies:

“The solar wind at Earth is about 70 times hotter than one might expect from the temperature of the solar corona and from how much it expands as it crosses the void. The source of this extra heat has been a mystery of solar wind physics for several decades,” said Dr. Craig DeForest, lead author of the research paper.

Briefly, according to the announcement, it is turbulence that causes variability in the solar wind, as well as its anomalously high temperature. So, two of the solar wind’s most important aspects, its high temperature and acceleration, are said to be from fluid dynamic phenomena such as the Rayleigh-Taylor instability. Using the STEREO spacecraft, a twin observatory orbiting the Sun, scientists tracked components of Comet Encke’s tail, “clumps” of “glowing, ionized gas”. Fluctuations in the solar wind are said to be “mirrored” by changes in the glowing gas.

It is confirmed that the movement of electric charges in plasma forms electromagnetic fields that constrict the current. As previous Picture of the Day articles point out, the constricted channel is known as a “Bennett pinch,” or “z-pinch.” The pinched electric filaments remain coherent over long distances, forming helical structures that can transmit power through space. That phenomenon is what scientists refer to as flux ropes. They also create electromagnetic structures called “plasmoids”. The glowing blobs observed in Encke’s tail are plasmoids.

Electric fields freely accelerate charged particles, which move outward in opposite directions, activating an electric current that follows the Sun’s magnetic field. The THEMIS satellites found “space tornadoes” (Birkeland currents), electrified plasma vortices rotating faster than 1,600,000 kilometers per hour, about 64,000 kilometers from Earth. The THEMIS satellites, together with Earth-based stations, verified that those charged plasma formations are connected to the Sun.

Since plasma is composed of charged particles, any movement constitutes an electric current, which generates a magnetic field. Electrons spiral in the resulting magnetic field, creating synchrotron radiation that can shine in all frequencies, as well as preserve initial power output from the Sun.