Home Picture of the Day Food for Thought 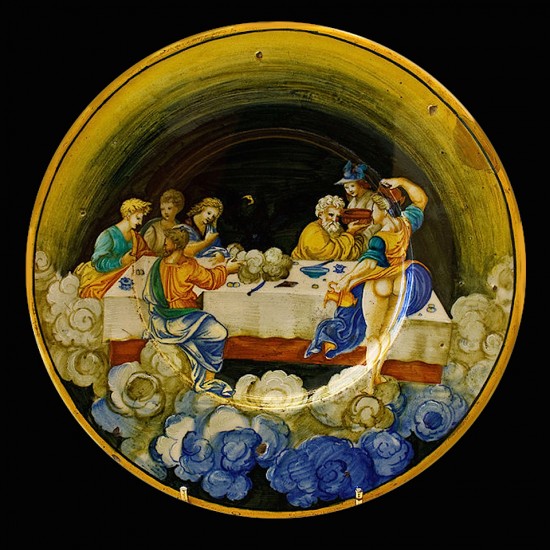 That mythology has an appetite for bizarre imagery is hardly a secret.

A remarkable motif in the world’s creation myths, rarely even recognised, is that of the ‘edible sky’. A few examples will suffice to give a flavour of the theme.

A 19th-century Greek myth concerning the separation of sky and Earth, told in Boeotia as well as on Cyprus, opens with the words: ‘In ancient times the sky was so close to the earth that the cows were able to lick it.’ To “account for the separation of Divinity from men below”, the Cic Dinka (near Bor, South Sudan) told “how there was once a wall in the sky, which held a man in until he ate part of the wall, and was therefore pushed below by Divinity.” According to the Kassena, a group of Gurunsi (northern Ghana and southern Burkina Faso), “in the beginning the sky was close to the ground. An old woman was about to cook, but the sky was in the way, so, in her temper, she cut off a piece and made it into soup. The sky, angered, went away to its present place.” The inhabitants of Nias (off the west coast of Sumatra) ‘assumed that the sky was formerly near the earth; the priests arrived in the sky along a ladder. People used to scrape the fat off the sky with alang-alang leaves. One day a man ordered his wife to fetch fat again; in her distress she took an axe and hacked into the sky; this was then lifted up and the woman was taken with it.’ And lastly, suspecting that the reader has had his or her fill, the Ngaju Dayak (eastern Kalimantan) related:

‘The sky was … in the beginning close above the earth; it consists of an edible, oily substance and served the people for food. But (the) Anak Mahatara, the son of Mahatara, the highest god, taught the people to plant rice, etc., which outraged Mahatara and he moved the sky further away from the earth.’

A Dutch anthropologist was informed that it was coconut flesh that the sky used to be made of and that the name of the ‘son of Mahatara’ was Manjamei. As icing on the cake, he learned that the latter figure subsequently retreated into the sky along a rope – a familiar expression of an axis mundi.

The Russian archaeologist and anthropologist Yuri Berezkin defined the archetype as follows: “First people cut off pieces of the sky or God to use them as food or medicine.” Additional examples could be multiplied ad nauseam; Berezkin’s collation includes instances from western New Guinea, northeast India, the Chuvash, the Serbians and a large number of African groups. Wholesome fare such as the Greek ambrosia, the Hindū soma and amṛta and the Icelandic mead, ostensibly ingested by immortal beings in the sky or atop a cosmic mountain, may well belong in the same category. The theme fits in with the deeper understanding that life or immortality used to be supplied by the sky or by axes mundi, when people still communed with the gods.

The esculence of the former sky reminds of Immanuel Velikovsky’s provocative argument that the planet Venus was once a comet which wrapped the earth in an impenetrable “veil of gloom” and so caused the precipitation of carbohydrates – comestibles that went down as ‘manna’ in Hebrew lore. Unpalatable though the idea may seem to a sober mind, the savant had the support of the Russian chemist Vassily Ilyich Komarewsky (1895-1957), who wrote:

“After the catastrophe, clouds of thick dust and vapor enveloped the earth for many years. It is possible that in the dust and vapors, as a result of bacterial activity, organic compounds were formed – for instance, carbohydrates.”

Yet whilst some may savour this thought, the ‘manna’ consumed by the Israelites seems to have been quite a different kettle of fish than the ‘edible sky’. It was harvested from the ground and placed in a historical framework – that of the mid-15th century BCE. By contrast, the traditions cited above – as well as much of Velikovsky’s non-Hebrew source material – firmly situate the theme in the context of global creation mythology: the edible sky was the ‘low sky’ associated with primordial darkness and axes mundi, a solid ‘firmament’ which could be physically pecked at or perforated. The remarkable interpenetration and internal consistency of all these ideas, combined with their oddness and ubiquity, cautions against taking them off the table.

Although Komarewsky whetted the appetite for a workable model, he does not seem to have identified any specific chemical processes by which cometary or atmospheric hydrocarbons could have been converted into carbohydrates. Such mechanisms might well be feasible, however. Decades ago, scientists discovered that fungi such as Candida rugosa convert hydrocarbons into monosaccharides. Monosaccharides – which are simple sugars such as glucose and fructose – are the simplest forms of carbohydrates. Yeasts are known to subsist high up in the atmosphere, though whether these are the same species as the sugar makers is moot.

If the edible sky was the ‘low sky’ of creation myth, a joint physical explanation must be found. As argued repeatedly on these pages, the defining condition may have been that of a geomagnetic excursion, characterised by compression of the atmosphere, a prominent geomagnetic multipole and plasma z-pinch discharges to the surface. The marked electrical activity in the atmosphere might well have been an essential ingredient. Analogues may exist elsewhere in the solar system. Saturn’s moon Titan is wrapped in opaque layers of haze in which the presence of higher hydrocarbons and other organic compounds is highly probable. Venus possesses a similar dense atmosphere, but definitive evidence for hydrocarbons has so far not emerged.

For the time being, however, the idea of a dense atmosphere generating food remains exceedingly hard to stomach. Instead, a far more digestible explanation of the stories about an edible sky is available. After all, those who munched away at the sky were mythical ‘people’ – the same characters who were widely described as giants and sorcerers capable of flight, believed to have turned into animals and celestial bodies when the ‘golden age’ came to an end. Clearly, these were no actual human beings, but metaphors for extraordinary natural phenomena observed by early storytellers. The ‘eating’ could simply describe any process by which contact between two structures coincided with the apparent or real erosion of one – in the same way that many cultures understood eclipses in terms of a monster ‘devouring’ and ‘disgorging’ the sun or moon. In this case, a physical explanation of the ‘low sky’ must include the notion of invasive entities seemingly diminishing its surface area.

Did the atmosphere once provide actual nourishment to people or did unusual events merely feed the imagination of the myth-makers? Alternatively, could a combination of the two have occurred? Could one have one’s cake and eat it, too? Alas, the definitive answer to these questions may remain pie in the sky.