Home Picture of the Day Written in the Wind

Written in the Wind 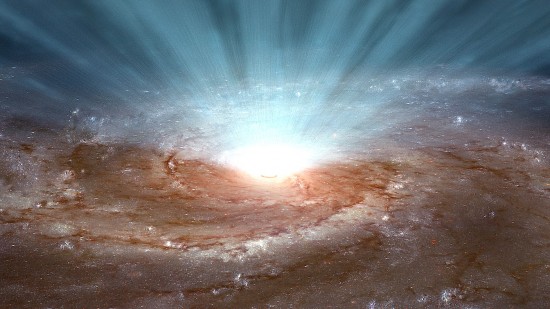 Wind does not blow through the cosmos.

According to a recent press release, “winds” from a supermassive black hole (SMBH) in the center of galaxy PDS 456 are distorting the shape of the galactic structure.

An electric current in plasma generates a magnetic field that will constrict the current flow. As has been pointed out in previous Picture of the Day articles, the constricted channel is known as a Bennett pinch, or z-pinch. The “pinched” filaments of electric current remain coherent over large distances, spiraling around each other, forming helical structures that can transmit power through space.

Plasma physicists identify those threads of electricity in almost every body in the Universe. The cometary “tail” of Venus is “stringy” as NASA scientists describe it. The glow of planetary nebulae resolve into strings and intricate webs. Herbig-Haro stars and some galaxies often reveal braided filaments. These filaments are Birkeland currents, and they are only the visible portions of enormous electric circuits. The remainder of the galactic circuit generates magnetic fields that can be mapped, as in the case of PDS 456.

High-density currents flow out along the galactic spin axis and form double layers that can sometimes be seen as radio and X-ray lobes around active galaxies. The currents then spread out around the circumference, returning to the core along the spiral arms. Every element in a galactic circuit radiates energy, indicating that they are powered through coupling with larger circuits. Galaxies appear to occur in strings, so the extent of the larger circuits can be inferred.

Plasma’s behavior is driven by conditions in those circuits. Fluctuations can form double layers with large potential voltages between them. The electric forces in double layers can be much stronger than gravitational and mechanical forces. Double layers separate plasma into cells and filaments that can have different temperatures or densities.

Double layers emit radio waves over a broad band of frequencies. They can sort galactic material into regions of like composition and condense it. They can accelerate charged particles to cosmic ray energies. Double layers can explode, releasing more energy than is locally present. This effect can be seen in stellar flares or so-called “nova” outbursts.

This vision of the cosmos sees various components coupled to and driven by circuits at ever larger scales. Electrons and other charged particles accelerating through intense electric fields radiate “shouts” of energy in many bandwidths. Changing conditions within the Birkeland current generators of some galaxies means that the radiation patterns will change over time. Rather than the fantastical physics of black holes, PDS 456 is probably demonstrating those changing conditions.