Predictions for Comet Science After Rosetta 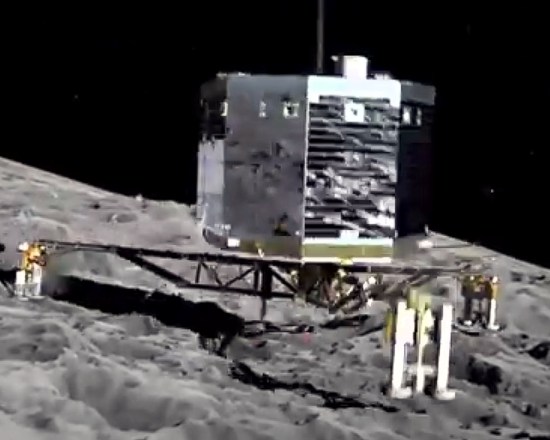 The Rosetta mission to Comet 67P is still in its early stages, but the remarkable discoveries have been coming for some time. Here is a quick review of key findings so far:

Like other comet surfaces, 67P is blacker than charcoal, a continuing dilemma for comet science.

Its surface has no observable water-ice despite the unprecedented high res-images at close range. If the comet’s jets mean water is being ejected from the nucleus, the sources should show up; Rosetta has delivered no observation-based glimpses of subsurface water-ice, an absolute requirement of popular comet theory.

The nucleus has numerous craters, including circular, overlapping craters, as seen below.  Given the extraordinary distances between comets in remote space, astronomers preclude voluminous crater production by impact, and even one collision would be a remarkable coincidence. 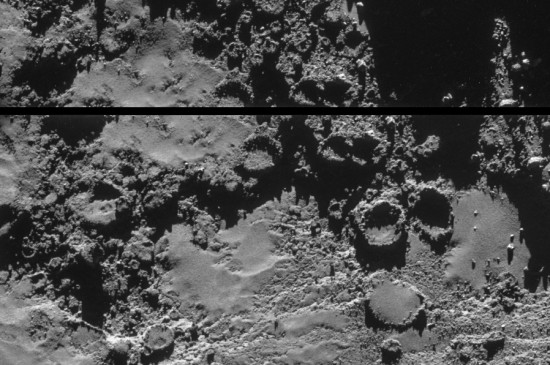 To consider the Electric Universe explanation for such craters, through the process of Electrical Discharge Machining – EDM – consider the following picture of anode crater formation in EDM process, published here.

As discussed in several Space News from the Electric Universe reports, the comet has a double-lobed or “rubber duck” form, which astronomers have generally attributed to a low-velocity impact that mysteriously melded two comets together. We again point readers to Dr. C.J. Ransom’s experiment, which replicated this form in the laboratory with an electrical discharge to a sample of hematite (image below): 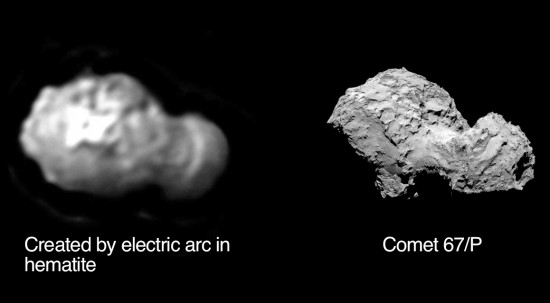 Enigmatically the comet is tortured with sharp cliffs, projecting peaks, deep pits, and boulders of every size. The dramatically “carved” appearance has shocked mission scientists, though it amounts to an explicit prediction of the Electric Universe, which states that most—and likely all—comets were excavated electrically from planetary surfaces in a cloud of rocky debris.

Spectroscopic analysis has shown that 67P began producing the signal of water in its coma while still a surprisingly vast distance from the Sun. The mystery deepened on October 23rd, when scientists from the University of Bern reported: “The idea was that at distances outside of 3 AU, the comet would mostly sublimate the very volatile molecules: carbon dioxide and carbon monoxide. However, apart from all these smelling ingredients ROSINA is detecting many more molecules already at large distances from the Sun which comes as quite a surprise.” (PDF of the statement may be read here).

In our recent Space News on Rosetta, we noted that electrochemical processes, not dissimilar to those proposed in peer-reviewed papers for Mercury’s putative ice deposits and water in the lunar soil, may in fact be responsible for the signal of “water” appearing in the comet’s coma—a potential game changer in comet science. As Wal Thornhill explains, “The cathode jets strip and ionize atoms of oxygen from minerals on the comet and accelerate the negative ions away in a fine jet. The oxygen ions then combine with the protons in the solar wind to form the hydroxyl radical, OH, which was mistakenly assumed to be evidence of an ultraviolet breakdown product of water molecules from the comet. Oxygen and hydrogen have both been found in the comet’s coma, by the Rosetta ultraviolet spectrometer.”

We understand that working scientists, like all human beings, operate within the constraints of longstanding theory. Yet it is dismaying that no one has yet wondered publicly whether the comet’s present activity is really due to warming from the Sun.

Mission scientists will attempt to secure the Philae lander with harpoons and ice screws on the comet’s blacker than charcoal, ice-free, complex and rocky surface on November 12h. Regardless of whether the lander’s augers successfully penetrate the nucleus and root the probe long-term (far from certain), proponents of the Electric Universe predict that after Rosetta, comet science will never be the same.

Historically, fundamental changes in established theory can be painfully slow in coming. Consider the aftermath of NASA’s Stardust mission to comet Wild 2 in 2004. Scientists had never dreamt that the tiny fragments of comet dust brought back to Earth had not accreted in the deep freeze of interstellar space. The name of the mission itself—“Stardust”—was based on the assumption of comet formation in a primordial interstellar cloud. Nevertheless, it had to be admitted that the complex crystalline structures were formed under astonishingly high temperatures. Mineral inclusions ranged from anorthite, which is made up of calcium, sodium, aluminum and silicate, to diopside, made of calcium, magnesium and silicate. Formations of such minerals requires temperatures in the range of thousands of degrees.

NASA curator Michael Zolensky said, “That’s a big surprise. People thought comets would just be cold stuff that formed out … where things are very cold….It was kind of a shock to not just find one but several of these, which implies they are pretty common in the comet.”

Researchers were forced to conclude that the enigmatic particles formed at a superheated region either close to our Sun, or close to an alien star. “In the coldest part of the solar system we’ve found samples that formed at extremely high temperatures,” said Donald Brownlee, Stardust’s principal investigator. “When these minerals formed they were either red hot or white hot grains, and yet they were collected in a comet, the Siberia of the Solar System.”

Some scientists speculated that perhaps something occurred in or very near the Sun in its formative phase, flinging immense quantities of material out to the periphery of the Sun’s domain (far, far beyond the orbit of Pluto), all the way to the Oort cloud. Then the researchers reminded themselves that this would produce a mixing and contradict the zoning that is evident in the asteroid belt. “If this mixing is occurring, as suggested by these results, then how do you preserve any kind of zoning in the solar system,” Zolensky asked. “It raises more mysteries.”

A 2007 report states that parts of Wild 2 formed in an area close to the Sun. The spacedaily.com site writes:

“The X-ray and isotopic analyses point to gas acquisition in a hot, high-ion flux nebular environment close to the young sun.”

Interestingly, a few scientists have suggested that a “transient heating event” such as shocks or, believe it or not, lightning in the outer regions of the protoplanetary disk may have created the anomalous minerals in the WlId 2 dust samples. But will this proposed electrical connection of comets to planet formation be sufficient to inspire questions about the foundations of comet theory?

Astronomers have recently acknowledged that the standard theory of planet formation has failed, and a new theory is required. As the July 2, 2014 headline Planets in Chaos in the journal Nature states: “The discovery of thousands of star systems wildly different from our own has demolished ideas about how planets form. Astronomers are searching for a whole new theory.” The problem for astronomers is, exoplanet systems seem to play by their own rules. Planets and stars are routinely observed that “shouldn’t exist” in the standard theory, which imagines them forming through gravitational collapse in a spinning cloud of gas and dust. As one astronomer quoted in the Nature piece states, the core-accretion theory of planet formation has “led to no success in extrapolating what’s out there.”

The Dawn space mission recently gave an additional jolt to planet formation theory. Scientists had theorized that the asteroid Vesta is a “planet embryo” that came into existence at the same time as the Solar System. This theory states that the asteroid suffered an enormous “double meteorite impact” that dug tens of kilometers deep, and would have ejected material onto the asteroid’s surface. Since olivine is a main component of planetary mantles, the investigators expected to find it in abundance near the so-called “impact craters.” No olivine was detected. As the website Science Daily reports, these findings “challenge a fundamental component in planet formation models, namely the composition of the original cloud of matter that aggregated together, heated, melted and then crystallized to form planets.”

Sadly, no consideration has been given to the possibility that the asteroid is not primordial. Nor have theorists asked if the pervasive cratering might have occurred through any process other than impact across aeons of solar system history. In fact, cratering by impacts seems profoundly unlikely.  As in the case of the large crater on Martian moon Phobos, an impact of sufficient energy to create the largest Vesta crater would surely have shattered the body.

The startling truth is that no coherent and reliable story of our Solar System’s birth and evolution remains.  And comet theory is entirely in flux. As theorists begin to consider possibilities beyond the primordial “snowball-comet,” it’s not unreasonable to expect innovative scientists to arrive at the Electric Universe through the back door. The idea of lightning-generated comet material is just one example, and many similar openings are now likely. Electrical phenomena will continue to provoke new frontiers in comet exploration, and we now have many reasons to believe that Rosetta will be remembered as a critical turn on the path of discovery.