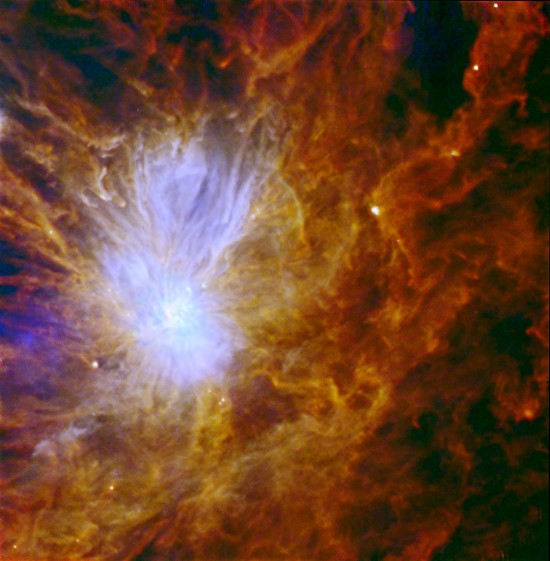 The standard model of star formation proposes that new stars result from compression waves passing through clouds of dust and gas. It is thought that supernovae explosions from elsewhere in the galaxy push nebulae into a star making process based on gravitational collapse. Electrical activity never enters the discussion. It is always “hot gas” instead of “plasma.” Astronomers occasionally state that the hot gas is plasma, but they mean “hot neutral gas” and not ionized matter. Nebular clouds are commonly analyzed in terms of kinetic gas behavior and not plasma physics.

Nebulae could be thought of as fluorescent lamps emitting light at the excitation frequency of specific gasses. Electricity causes plasma within a lamp, such as a neon light, to glow. According to astronomers, supernova shock waves are able to initiate many frequencies of light because the compressed gas is heated to high temperatures. However, since ionized oxygen frequencies make up more than 90% of the light from planetary nebulae, they should be thought of as oxygen discharge tubes and not balls of hot gas.

The European Space Agency (ESA) believes that Mon R2 is a prolific stellar nursery, constantly bearing new stars, although the dusty environment makes it difficult to see most of them. A new image of the nebula confirms that it is filamentary in nature, leading to the conclusion that Birkeland currents are present. The filaments that spiral through and away from Mon R2 are named after Kristian Birkeland, who first proposed their existence in the late 1800s. Those currents form scalable plasma structures that can transmit electric power all around the galaxy.

Gas cannot be heated until it gives off intense radiation (extreme ultraviolet and X-rays) without electrical input. Waves of ionized particles detected by ESA comprise the flow of electric charge, so Birkeland currents can form, causing electromagnetic Bennett pinches (z-pinches) that can squeeze plasma with such force that it rapidly compresses. Electric charge flowing into those regions can then force the plasma to erupt in a discharge. Nebulae are plasma formations behaving as the laws of electric discharges and circuits dictate.

No further study is required when one considers the Electric Star hypothesis. Rather than mechanical action (heated gas), Mon R2’s radiation is due to electric currents powering its interior stars. Electrical sheaths (double layers) that are normally invisible receive greater input from galactic Birkeland currents in which they are immersed, entering the “glow discharge” state.

In conclusion, increased flux density pulls matter from the surrounding space (and other stars) into Birkelend current filaments that electrically ignite nebular gasses in Mon R2.

Hat tip to William Thompson for the pointer.