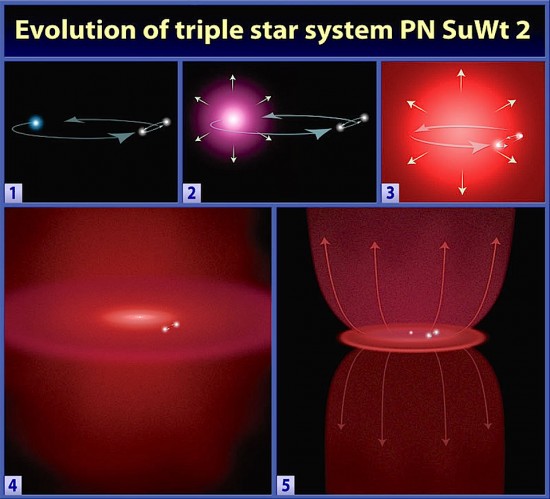 Astronomical theories predict a white dwarf star that can not be found.

In the nuclear view, a planetary nebula is the result of a dying star that has exhausted its hydrogen/helium fuel supply and collapsed under gravitational compression. The stellar implosion rebounds off the core, throwing massive amounts of star stuff into space.

Since their initial discovery 200 or more years ago, planetary nebulae have demonstrated behaviors and characteristics that are not easy to explain. They exhibit helical loops, rings, bubbles, jets, lobes and many other features that seem to trump standard theories. They are said to be composed of hot gas and owe their morphology to the influence of shockwaves from exploding stars or the pressure from stellar winds blowing through them. In some cases, the nebular forms are described as “like a windsock” inflated by a strong breeze.

A recent announcement from Cornell University by researchers operating the Hubble Space Telescope describe PN G311.0+02.4 as “…an unusual object with a prominent, inclined central emission ellipse and faint bipolar extensions.” Astrophysicists expected the nebular material to be shining because of extreme ultraviolet radiation from a white dwarf star at its center. However, no such star is there and the ultraviolet light has not been detected.

The nebular ring (or spherical shell) does contain a pair of stars in orbit about a common center of gravity, moving at a velocity of one revolution every five days. The stellar pair is more than 100 times brighter than the Sun and nearly three times hotter. Although the stars are so hot and shine so brightly, the radiation is not powerful enough to energize the nebula. As the Cornell investigators assume, only a flood of ultraviolet light, such as that from the missing white dwarf, could do that.

Astronomical theories do not yet have a mechanism for the nebular clouds and energetic emissions that have been found. They do not know how stars “shrug off” their outer layers or how they eject lobate structures from their polar axes. The reason for the misunderstanding is that nebulae are composed not of hot gas, but of plasma. Gases obey the laws of kinetic motion: molecules bump into each other due to thermal energy or they are accelerated by the impetus imparted by other fast-moving particles.

Plasma behaves in accordance with the laws of electricity rather than Newtonian physics. Stars are created within Birkeland currents that flow in a great circuit through the galaxy. The Bennett pinch effect squeezes plasma inside these cosmic “transmission lines” in space, igniting stars and forming toroidal currents around the stellar equators. It is actually the electrical current density that causes the plasma in nebular rings and shells to glow.

According to Electric Universe theory, PN G311.0+02.4 is actually an hourglass-shaped toroid viewed in perspective. The binary star in the center of the nebula generates a current sheet along the system’s equatorial plane that astronomers have misidentified as a “stellar wind”. It is more likely that Birkeland currents pass through regions of greater density in the disc of gases around the twin stars, causing the disc to light up in a bright ring like a searchlight illuminating clouds in the sky. As the publicized observations confirm, the ring is not lit by ultraviolet radiation.

Since plasma in laboratory experiments forms cellular structures separated by thin walls of oppositely charged layers (called double layers), it is probable that the same thing happens in nebulae.

As Hannes Alfvén wrote: “…space in general has a ‘cellular structure’, although this is almost impossible to observe unless a spacecraft penetrates the ‘cell walls’ (current sheets). This means that in distant regions, we cannot hope to detect the cell walls directly. Nor can we tell the size of the cells. It is unpleasant to base far-reaching conclusions on the existence of a structure which we cannot detect directly. But the alternative is to draw far-reaching conclusions from the assumption that in distant regions, the plasmas have properties which are drastically different from what they are in our own neighborhood.” (Alfvén, H., Cosmic Plasma, Chapter II, Electric Currents in Space Plasmas)

Also, as Professor Donald Scott makes clear in his book, The Electric Sky, a planetary nebula results from electrical overload in a star – a normal star flaring up from abnormal electrical stress. The observed filamentary, cellular and toroidal structures are characteristic of plasma behavior.