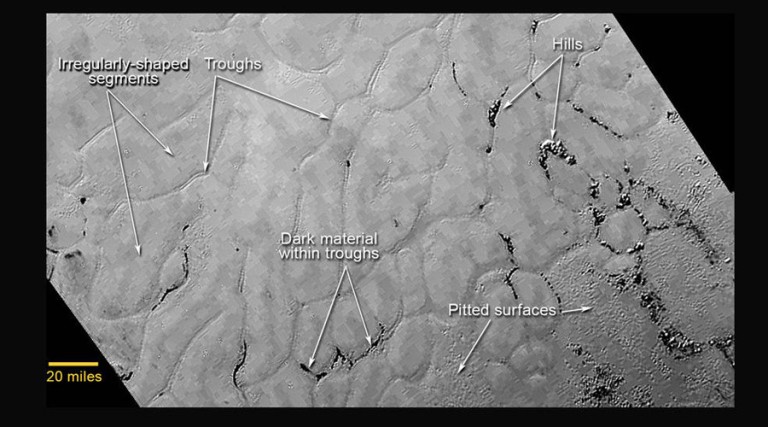 Look at these traces of rilles winding the surface of Pluto. We’ve seen this on Mercury, the moon and Mars. We’ve seen it on the moons of Saturn. Now we see them on Pluto and its largest moon Charon.

What would cause these? Planetary scientists with the New Horizon’s project theorize it is because Pluto has a water ice core that has been seismically active in the recent past.

The New Horizon’s team acknowledges this surface looks very similar to surfaces seen on Mars, where they attribute the polygonal structures to be caused by subsurface lava tubes that have collapsed.

The assumption Pluto has a water ice core requires a different explanation for its rille features. On Pluto, it is believed these twelve mile wide polygons are either convection cells, presumably frozen into the surface as the planet cooled, or they are the consequence of contraction stresses as the surface shrank, analogous to the polygonal cracks in dried mud.

Many rilles also exhibit circular craters that seem to appear in clusters along the path of the rille. New Horizons also photographed the same features on Pluto’s largest moon Charon.

According to New Horizons researcher John Moore, “When you look at this plain you can see a vast, craterless plain with some strange story to tell.” He added that he first thought the only way to describe the plain was as “not-easy-to-explain terrain”.

The Electric Universe provides a different theory for these features and many other observations we can see in the earliest photos streaming from Pluto. The rilles appear to be “breakdown” channels from high-energy electrical discharge events.

Other features found on Pluto have the New Horizons team giddy with wonder and astonishment, since these features are a complete surprise.

The Electric Universe wonders at the New Horizons team’s surprise since these features are consistent with the features of other rocky planetary bodies we look at.

Let’s take a look at other features discovered by New Horizons:

The New Horizons team and NASA have done a spectacular job in getting this data. The successful LORRI CCD camera is providing long-range detail with amazingly high resolution.

The findings are somewhat baffling to the team, however. As stated by John Moore on the New Horizons research team, “These are the early days of the post-encounter analysis. We’re still entertaining, as you can tell, the widest range of hypotheses. We are acutely aware that jumping to conclusions comes at great peril.”

Unfortunately, they are already jumping to conclusions, trying to explain Pluto’s features with standard model ideas. The New Horizon team may wish to expand their horizons a bit further than they do now if they want answers. They will find these features explained – even laboratory demonstrated by the EU Theory if they dare to look.

As more pictures and data comes in, we suspect there will be more similarities to the features of Mars and our moon, and few features that match the standard model.