Home Picture of the Day The X Factor 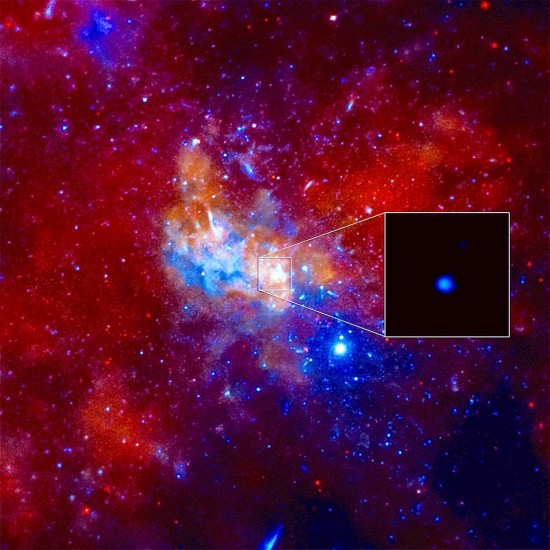 A massive X-ray burst from the center of the galaxy. Credit: NASA/CXC/Stanford/I. Zhuravleva et al.

“The largest X-ray flare ever detected from the supermassive black hole at the center of the Milky Way galaxy” was recently announced by the Chandra X-ray Telescope observation team. According to the report, the extreme energy calls into question how the putative Super Massive Black Hole (SMBH) that is supposed to exist at the center of the galaxy behaves, since the burst of X-rays was almost three times brighter than any other X-ray event in that region.

Astronomers propose two theories about how such a flare could happen. First, an asteroid was torn apart by the SMBH’s intense gravity, leaving the debris to circle the black hole “like water circling an open drain” until it was heated up enough to create and X-ray flare just before “falling in”.

Second, they resort to a fictional concept known as “magnetic reconnection” to explain the X-rays. According to the news release, so-called magnetic field lines are so “tightly packed” that they become “tangled”. As those lines rearrange themselves and reconnect, the “magnetic energy” is converted to light and heat, including X-rays and extreme ultraviolet light.

However, in an Electric Universe, charged particles in motion comprise an electric current. That current wraps itself in a magnetic field. As more charged particles accelerate in the same direction the magnetic field gets stronger. A familiar idea to electrical engineers, but when astronomers find magnetism in space they are mystified. They resort to ironic ideas about magnetic reconnection.

One of the most serious obstructions to understanding what is happening in the center of our galaxy is the insistence on a black hole as the motivating factor. In a previous Picture of the Day, mathematician Stephen Crothers demolished the entire idea of black holes by turning the mathematics used to describe them on its head. Despite announcements from various astronomical theaters, no black hole has ever been detected.

Instead of holding on to theories that do not relate to the real world, and refusing to listen when those theories are challenged (“No, I won’t look through the telescope!”), astronomers are missing an avenue of investigation that could open up entirely new worlds of physics.

As early as 1981, astrophysicist Hannes Alfvén came up with an “electric galaxy” theory. He observed that galaxies resemble homopolar motors. A homopolar motor is driven by a radial electric current in a circular metal disk. The metal disk is placed between the poles of a magnet, whereupon the interacting magnetic fields cause it to spin at a rate proportional to the input current.

X-ray observations of the galactic core also reveal a plasma torus structure there known as a “plasmoid.” High frequency radiation from the plasmoid is similar to that from electrically excited stars. A strong electromagnetic field in the plasmoid accelerates particles to high speed, causing them to spiral in the resulting magnetic field and emit X-rays.

What Chandra found at the core of the Milky Way is plasma that behaves exactly the way it behaves in experiments on Earth. Some laboratory measurements show temperatures ten to a hundred times higher than simple kinetic effects can produce. If astronomers had known of the lab results, and taken them as seriously as they take theories of hot gas, they would not have been surprised.