Home Picture of the Day Moon to Moon 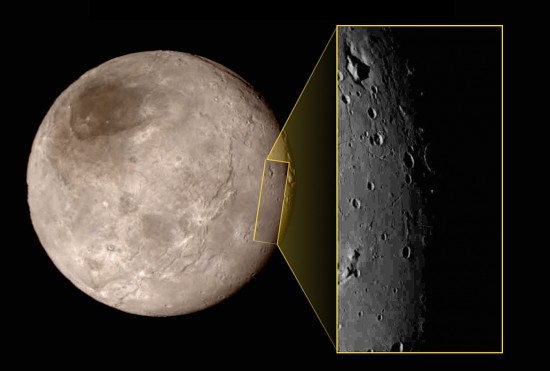 Pluto’s moon, Charon was discovered by astronomer James Christy on June 22, 1978 when he noticed a “bulge” on the disk of Pluto that was subsequently found in telescope images as far back as 1965. Charon is a frozen, desiccated tomb of a world with an average temperature of -220 C. As the image at the top of the page reveals, its closest cousin could be the Moon, although at least one of its surface features is reminiscent of Mt. Sharp in Gale crater on Mars.

Modern theories suggest that the Moon experienced intense selenological activity early in its history. Offset slip faults, known as “graben” on the Moon are said to result from slow crustal movements similar to those that cause terrestrial earthquakes. This theory implies that the Moon was born long ages ago, perhaps several billion years or more ago, and has not changed much since. A prediction about how Charon is analyzed proposes that the New Horizons team will invoke similar processes.

Since scientific theories are largely parochial in nature—what is observed on Earth is used to model formations observed on other celestial bodies—clues that do not involve conventional geological forces are missed. There is no evidence that the Moon or other small bodies in the Solar System once experienced tectonic activity, so resorting to such an idea implies a lack of vision. Electric Universe theory, on the other hand, proposes that structures in space ought to be used to model what is found on Earth.

Charon exhibits chasms and rilles, as well. It is thought that lunar graben formed when the Moon’s crust pulled apart. That “stretching” created two parallel faults, allowing the surface between them to collapse into a valley. Similar formations are observed wherever telescopes and satellites look. A reasonable hypothesis will demonstrate how airless, frozen bodies can compare to hot, wet planets like Earth. Since consensus opinions give electricity little credence, the only recourse is thermal shock or crustal spreading, even when those forces are nothing when compared to the effects of multi-trillion joule electrical discharges.

Plasma physics states that charged objects immersed in electric fields develop Langmuir sheaths, named after plasma pioneer Irving Langmuir. Langmuir sheaths isolate charged objects from each other inside double layers. If the charged objects are planets or moons, they might be surrounded by double layer plasmaspheres. Charon has no plasmasphere, so it is not electrically active at this time in its history. However, that does not mean that it was not enveloped in a charge sheath at some time in the past.

Rather than stretching or collapse, the rilles, craters and graben on both Charon and the Moon could have been cut by electric discharges at some time in the recent past.