Home Picture of the Day The Electronic Sun 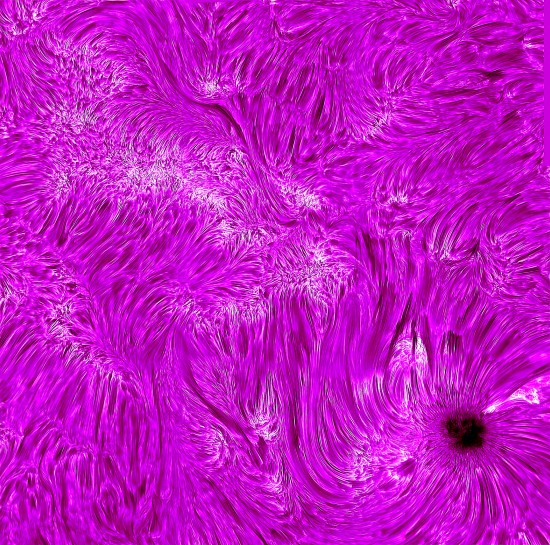 Spicules on the Sun in Hα (hydrogen-alpha) light at 6563 angstroms. Credit: IBIS/Kevin Reardon

“Plasma phenomena are complicated and can be understood only with the help of a very sophisticated diagnostics.”
— Hannes Alfvén

According to consensus opinions, the Sun accelerates charged particles into space in the same way that sound waves are amplified. The interior solar energy travels outward through “acoustical wave-guides,” known as magnetic flux tubes. Spicules balloon thousands of kilometers above the photosphere and carry the hot gas with them.

As standard theories about the Sun propose, there is also a vast “conveyor belt” circulating solar matter down into magnetically active zones deep inside the solar interior, where it is “reenergized.” When sunspot magnetic fields begin to decline, the conveyor belt pulls what’s left inside the Sun.

In an Electric Universe, the Sun is the locus of positive charge with respect to interstellar plasma. Sunspots appear when electric discharges penetrate the photosphere, allowing electric charge to flow into its depths. Electromagnetic flux tubes expose the Sun’s cooler interior. The idea of acoustic heat transfer from the core cannot be supported by any observations of the Sun.

Plasma discharge behavior is a better model for solar activity. Laboratory experiments with a positively charged sphere show that a plasma torus forms above its equator. Electric discharges bridge the torus with the middle and lower latitudes of the sphere. Spicules are consistent with the principle of “anode tufting,” a plasma discharge effect expected of an electronic Sun.

Sunspots are not a well understood phenomenon from the fusion stand point. It is known that magnetism is involved with sunspot activity, because gigantic loops and whorls of plasma can often be seen connecting two or more of them, held in place by the spiraling magnetic fields. Why or how that magnetism is at work on the Sun remains unclear in consensus opinions. Filaments and “fibrils” can be detected with high resolution photographic equipment in the penumbra, or darkened cores of sunspots. The swirling plasma spirals look more like electromagnetic tornadoes.

Closeup images of sunspot filaments indicate that they are charge vortices. Looking down into a sunspot means seeing the rotating discharge columns in profile. Electric discharges in plasma form rope-like, hollow tendrils. Since they are funnels of plasma, their centers are darker, where convection cells would appear darker at their edges.

Standard theory does not accept that the darker and cooler regions revealed by sunspots means that the Sun is cooler in its interior.

“It is not coincidence that the photosphere has the appearance, the temperature and spectrum of an electric arc; it has arc characteristics because it is an electric arc, or a large number of arcs in parallel. These arcs quickly result in the neutralization of the accumulated space charge in their neighbourhood and go out. They are not therefore stable discharges, but may rather be looked upon as transient sparks. Arcs thus continually appear and disappear. It is this coming and going which accounts for the observed granulation of the solar surface.” (A New Approach in Astrophysics and Cosmogony by C. E. R. Bruce 1944)

“In a low density plasma, localized space charge regions may build up large potential drops over distances of the order of some tens of the Debye lengths. Such regions have been called electric double layers. An electric double layer is the simplest space charge distribution that gives a potential drop in the layer and a vanishing electric field on each side of the layer. In the laboratory, double layers have been studied for half a century, but their importance in cosmic plasmas has not been generally recognized.” (Hannes Alfvén).

Looping electric charge flow generates secondary toroidal magnetic fields that surround the loop. When the charge accumulation grows too strong, the plasma double layer is destroyed. That event interrupts the charge flow and the stored electromagnetic energy is blasted into space as a solar flare. Solar flares can therefore be thought of as lightning bolts in and on the Sun, sometimes throwing vast quantities of matter into space at near relativistic speeds.