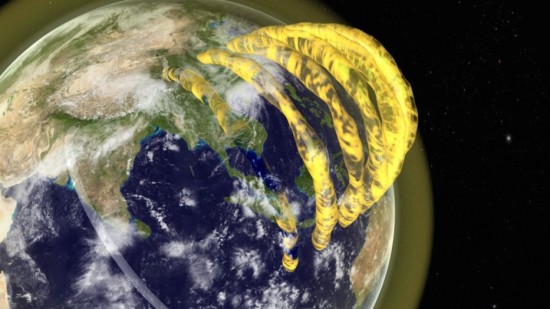 An international group of scientists, led by Shyeh Tjing Loi of the University of Sydney, has made the first direct measurements of what appears to be a set of field-aligned “density ducts” or plasma tubes in the inner layers of the earth’s magnetosphere, some 400 to 1000 km above the surface, where the ionosphere transitions into the plasmasphere.

They write: “The plasmasphere is believed to be embedded with cylindrical density structures (ducts) aligned along the Earth’s magnetic field … The structures are strikingly organized, appearing as regularly spaced, alternating tubes of overdensities and underdensities strongly aligned with the Earth’s magnetic field. These findings represent the first direct visual evidence for the existence of such structures.”

Myriad myths from practically all human cultures allege the former visibility of conspicuous ‘sky pillars’ such as trees, mountains or giants on which the sky rested, or ropes, stairways and ladders by which mythical beings travelled between heaven and earth. For convenience, anthropologists group such traditions together in a category of axes mundi (‘world axes’). Do the tubular structures in the earth’s upper ionosphere provide an empirical glimpse of the sort of physical phenomenon that may have inspired such curious traditions?

Researchers have always thought of the axis mundi as a singular fixture, usually associated with the earth’s rotational axis. Perhaps the first writer to have suggested a visible prototype for the mythical sky columns was Isaac Newton Vail (1840-1912). Vail envisioned vaporous canopies which would often form around the earth and disintegrate by precipitating down above the poles in arresting vortices. During the early 1970s, David Talbott began to state more categorically that the cosmic axis had to have been a visible feature of the sky not seen today, specifically a prodigious, interplanetary formation suspended above the earth’s rotational poles. The similar model submitted in 1974 by the late Frederic Jueneman differed in the details, but retained the same essential conception of the axis. Jueneman was the first to consider the subject in a plasma-physical context – as “a glowing plasma-like vortex”.

Glossing over the subsequent contributions of several other researchers, in 1987 Milton Zysman and Roger Ashton downscaled the axis mundi of myth to the terrestrial dimensions Vail had imagined. Moreover, they set a precedent with their respective arguments that it signified some sort of unusual, sustained aurora. In the years between 2003 and 2011, Anthony Peratt presented evidence from plasma simulations for a prehistoric ‘intense aurora’ in the form of a column above one of the earth’s poles, but one so gigantic that it stretched up to 701,000 km into space – almost twice as far as the distance to the moon.

In 2012, Robert Johnson and I concluded from a meticulous consideration of the geometrical aspects of Peratt’s column that a single, stationary and straight column could not possibly have been viewed around the world, as the association with ancient rock art and mythology would demand. It dawned on me that the mythological record actually requires the former visibility of multiple sky pillars distributed around the world, as opposed to a single one. This was not only to explain why similar observations could have been made globally at about the same time, but also because many individual traditions directly spoke of two, three, four or even more axes mundi, not only in the form of pillars, but also of arcs. This insight called for an overhaul of everything we thought we knew about axis mundi mythology.

It remains plausible that many of the mythical sky columns represent plasma tubes, often featuring z-pinch instabilities. I realised that geomagnetic excursions provide a possible mechanism by which such columns could have manifested as ‘intense aurorae’ within the earth’s geomagnetic field, sometimes as ‘intense’ as lightning. During excursions, the geomagnetic field weakens considerably, the north and south magnetic poles drift towards the equator and the other, minor poles of the field gain temporary prominence. The associated aurorae of these poles could account for the geographical distribution of multiple axes mundi, the feebleness of the field – combined with supersized coronal mass ejections from the sun – for the occasional occurrence of pinch instabilities at these locations.

Magnetospheric physics continues to reveal aspects of the earth’s electromagnetic neighbourhood which lend credibility to such scenarios. In 2009, enormous space tornadoes were discovered in the higher regions of the magnetosphere. Now one learns of these enormous plasma tubes far closer to the surface – at about the same altitude as the upper reaches of the aurorae and, like the latter, aligned with the geomagnetic field. The existence of these fixtures of the field demonstrates that it is not at all far-fetched to speculate about near-earth plasma columns which, one way or another, fed into the earliest cultural memories of our distant ancestors.

The interdisciplinary mind cannot help wondering whether the newly discovered tubes – singly or conjointly – could glow under some circumstances, such as a vastly increased influx of charged particles from the solar wind. For incidental geomagnetic storms, they might be invoked to explain the odd historical report of a stable quasi-auroral pillar where it would not be expected. And perhaps more extreme occasions such as geomagnetic reversals and excursions could switch the tubes as well as features in the upper magnetosphere to visible mode for longer periods.

It is unclear whether the tubes occur at all longitudes, but presumably they do. They are concentrated at latitudes between 30º North and 30º South, where myths of axes mundi are abundantly attested. They very nearly corotate with the earth, so that – if they were visible – they would largely seem to be stationary to an observer on the earth, drifting only slowly. If an entire tube were lit, humans would observe an arc running overhead and touching down at opposite sides of the horizon; if only the bases glowed, the observed effect in the vicinity of one – but not inside one – would be a luminous column rising from the surface. However, the tubes are so close to each other that an observer would probably discern more than just a couple of them from a single location. This is incompatible with the information gleaned from comparative mythology.

A satisfactory solution can hardly be expected until more is known about the relationship between today’s quiescent equatorial plasma tubes and the auroral circuitry, the ‘space tornadoes’ and the geomagnetic multipole. Conceivably, a range of intermediate phenomena exists between the recently detected tubes and the intense aurorae expected to attend geomagnetic reversals and excursions. There may be a connection with Peratt’s reconstruction of a ‘cage’ of longitudinal filaments around the earth, which was intended to describe a very different condition than the current plasma environment. Under increasing electrical stress, the field-aligned filaments may reduce their number by merging and reconnect with magnetic poles just as they begin to glow brightly enough to be visible. Whatever the answer will prove to be, a geomagnetic approach to axis mundi mythology is evidently a field in flux with considerable potential.

Hat tip to Robert Johnson, C. J. Ransom and Klaas Geertsma for discussing this subject with me.