How We Crossed Paths by Mike Heckrotte 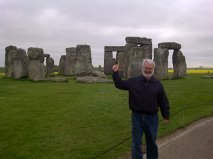 As an Electromagnetic Compatibility Engineer, I subscribe to an email list forum for Product Safety and EMC Regulatory Compliance professionals. In 2009 there was an off-topic discussion about the electrical nature of tornados and one of the members suggesting Googling “Electric Universe.” I did so and came across The Thunderbolts Project.

It took only a slight bit of reading to recognize, and welcome, Thunderbolts’ plausible and satisfying answers to questions that have otherwise been elusive. It took a few years to digest enough TPODs, books and videos to become a catastrophist.

When I describe the nature of this work to others, I often say that it is a paradigm shift like going from “The Earth is Flat” to “The Earth is Round.”

Although I have desired to attend EU Conferences for some years, my schedule has precluded this until now. Recognizing the importance of The Thunderbolts Project work, it is exciting to look forward to my first EU Conference to meet some of the people involved and take a vital step in the transition from being a home-study student to becoming a contributor. While new opportunities will surely surface at the conference, following are some already-identified areas of interest that I would like to discuss:

Given distance calculations based only on geometry, what can we then conclusively and independently learn or state about luminosity, red-shift, etc?

From a technical perspective, can the motions and charges of, and forces acting upon, the various bodies now within our Solar System be modeled well enough to depict this transition? Such a model could help confirm timelines and augment the historical record. Different initial conditions could be set up to assist with evaluating, for example, which of the Solaria Binaria theory or the Saturn-capture theory is correct (or is the axial tilt of the various planets sufficient to invalidate Solaria Binaria)? From an anthropological perspective, do we know enough from the observations made by our ancestors to make such a determination among these theories?

I am interested in experimentation because of my background as a test and measurement engineer who likes to tinker.  The motto “know by test” has particular meaning to me and gathering experimental evidence to validate or refute various theories is a natural inclination.

Recently I saw a documentary on Native American Indian life which included a view of the canyon showing multiple circular craters that (no surprise to us) bear a striking resemblance to craters on the Moon and other bodies. This is the first time I have seen a view of the canyon that showed the right level of detail at the right location, to be able to make such a vivid comparison. Perhaps this could be a TPOD.

Seeking to comprehend a simple large-scale model of one of the driving forces for our weather, I would ask if anyone has identified a connection between the flux of solar energy at the poles and the strength and/or other characteristics of the jet streams circling the Earth. Mike Heckrotte can be reached at Rfmike@comcast.net.