Home Picture of the Day What are Stars? 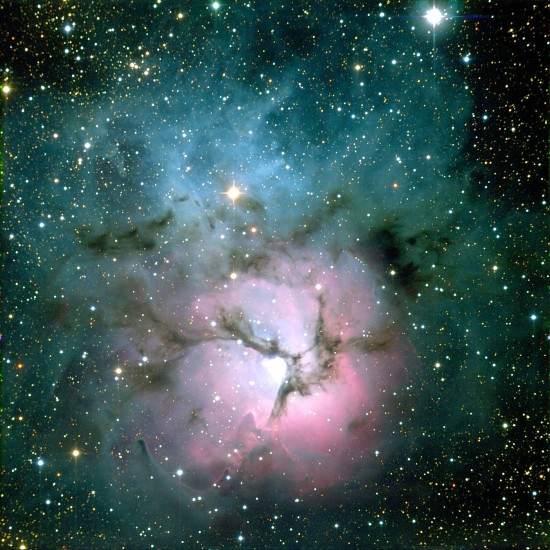 What are the stars? The question might seem self-evident, since children are taught from an early age that they are intensely bright, burning balls of hydrogen gas. A star’s great size, therefore its great gravitational attraction, is what conventional theories say holds the planets in their orbits. Stellar cores of fusion fire send energy on million-year journeys before radiation is emitted, so dense are their interiors thought to be.

How are stars formed and by what agency are they ignited? The answer, according to accepted astrophysical theories, is gravity. At some time, billions of years before any particular shining star was born, it started out as a wispy cloud a thousand times less dense than a puff of smoke. One of the questions that astronomers have been asking for many years about the process is what caused such insubstantial clouds to condense in the first place?

Star formation is initiated according to two main theories. First, a cloud might cool down from whatever high temperature it once possessed (although what event heated the cloud is not elucidated), so thermal energy falls off, allowing gravity to assert itself on individual particles, causing the cloud collapse in on itself.

Second, the explosion of a supernova (or intense bursts of radiation from a nearby star) might generate shock waves that pass through a proto-stellar cloud, forcing particles to collide and clump together. Gravity then takes up its familiar position, eventually pulling the cloud into a structure dense enough for fusion to take place.

In this paper, stellar ages and the conventional viewpoints that determine them will not be discussed. Suffice to say here is that stellar diagrams that attempt to establish age according to color and temperature are missing important points. If other electrical factors are added, temperature and brightness become a matter of externally applied electric currents and not internally generated fusion energy. The difference between the two concepts is not trivial, especially when they are used to explain other observations. Electrically driven stars is an entirely new paradigm.

Regardless of whether it is shock waves or “radiation pressure,” the energy that drives effects in conventional theories is kinetic and mechanically induced. In fact, lowering thermal activity is how the first theory suggests stellar formation begins. The second theory requires a star 20 times more massive than the Sun to irradiate a cloud from close-up for millions of years.

In an Electric Universe, gravity, density, compression, and mechanical phenomena give way to the effects of plasma. The stars are not hot, dense balls of hydrogen being crushed into helium and electromagnetic radiation by gravitational pressure. Rather, they are balls of plasma, with all the fusion taking place on their surfaces. Since there are no superdense fusion cores, their mass estimates are most likely being seriously overstated by papers written from the consensus.

The Electric Universe definition of “plasma” is not the conventional one of “ionized gas.” It is that confused apprehension of plasma that falls back on ideas about gas behavior and thermal ionization. “Plasma,” as contributing editor Mel Acheson wrote, “is an emergent (i.e., higher-level or statistical-level) orderliness of complex electrical forces: such properties as filamentation, long-range attraction and short-range repulsion, braiding, characteristic velocities, formation and decay of plasmoids, and identity of properties at different scales.”

Electric stars aren’t begotten in nebular clouds, their progenitor is charge separation. Positive ions and negative electrons move within plasma in ways not governed by gravity, although gravity might cause some heavy positive ions to create a charge surplus in one volume of space over another. When that happens, a weak electric field develops. An electric field, no matter how weak, will initiate an electric current that generates a magnetic field. Those fields interact with the magnetic fields generated by other currents.

In images from space, as well as in high-speed photographs of plasma activity in the laboratory, charge streams are seen to form twisted pairs of filaments, called Birkeland currents. Birkeland currents follow magnetic field lines and draw charged material from their surroundings. Magnetic fields pinch the ultra-fine dust and plasma into heated blobs of matter called plasmoids.

As the effect, called a “z-pinch,” increases, the electric field intensifies, further increasing the z-pinch. The compressed blobs form spinning electrical discharges. At first they glow as dim red dwarfs, then blazing yellow stars, and finally they might become brilliant ultraviolet arcs, driven by the electric currents that generated them.