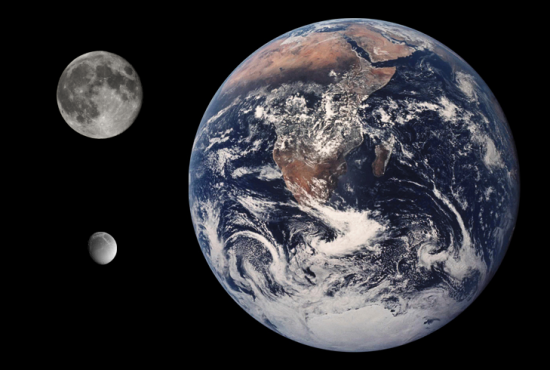 Dione compared with Earth and the Moon.

Saturn’s fourth largest moon indicates that plasma events of some kind once clawed into its surface.

The first images of Dione revealed a moon whose surface appeared to be dominated by bright “wisps” that wound around its face. Later, when higher resolution pictures were decoded, the wisps were discovered to be deep chasms and trenches that split large craters, running for hundreds of kilometers. Mission specialists remain baffled by the extent to which the moon has been “fractured”, although some form of faulting due to tectonic activity continues as their best guess.

The formerly named Cassini-Huygens mission was launched from Cape Canaveral on October 15, 1997. Few now remember the public outcry against the mission. There were several attempts by citizens groups to stop the launch because of the 33 kilograms of plutonium-238 that provides electrical power to the orbiter. Since there had been failures of other launch vehicles, the concern was that an explosion of the Titan IV-B rocket would scatter radiation over many hundreds of square kilometers in southern Florida. However, the launch was uneventful, and after several years flight time Cassini entered orbit around Saturn on July 1, 2004. A few months later, Cassini deployed the Huygens lander, which descended by parachute to the surface of the Solar System’s largest moon, Titan.

In the last eleven years, Cassini has made close approaches to a number of Saturn’s moons, Dione among them. The spacecraft’s nearest look at Dione was from a distance of about 67 kilometers. Dione’s mean diameter is 1123 kilometers. In comparison, the diameter of Earth’s Moon is 3475 kilometers, so Dione is among the medium-large moons in the Solar System. Iapetus, Rhea, and Tethys are similar in size, as are Uranus’ moons Ariel, Titania, and Oberon.

According to a March 2, 2012 press release, ionized oxygen molecules were detected on Dione, so it joins Saturn’s moon Rhea in possessing a highly rarified atmosphere. Planetary scientists speculate that the oxygen comes from solar wind ions impacting the water ice on both moons, causing it to crack into hydrogen and ionized oxygen. Dione also joins its sisters Tethys and Enceladus in spewing charged particles into the ring structure around Saturn. Like Enceladus, the “plumes” are ejected from numerous hot spots. Evidence exists that Dione also contributes to the plasma trapped within Saturn’s magnetosphere.

In the Electric Universe hypothesis, charged particles from Dione are due to plasma discharges that are ejecting material into space, in the same way that Jupiter’s moon Io contributes sulfur plasma to the magnetospheric torus around Jupiter. It seems likely that conditions in the past were far more energetic, forming Dione’s present day etched terrain. Grooves and canyons run parallel to each other, with sharp rims that rise abruptly and with no “gradually eroded” look to them. They have side canyons running off at ninety-degree angles and craters along their length, often in chains. The craters are shallow with no debris around them and have central peaks.

Since the moons of Saturn orbit within its plasmasphere and exchange electrical energy with one another, electricity must be considered whenever unusual morphology is observed. Projecting earthly geologic forces and the slow progress of erosion onto other planets and moons misses the point. Wind and rain erode Earth and presumably create canyons and valleys. When no wind or rain exist, such as on Dione, how does the fresh looking and unique topography occur? Should the same processes also be questioned on Earth?

Interestingly, surface maps of Dione show that it is red to some degree. All the new maps indicate it is redder on its trailing hemisphere, with the color tending to be more intense in the center of the disk. Although the leading face of the moon is also red, it is not as strong. The pattern on both hemispheres is difficult to explain because only one hemisphere or the other should normally be affected. Bombardment by a train of meteors, or particles from Saturn’s rings, should accumulate on the leading hemispheres.

However, it is most likely plasma that is flowing into the moon from its electrical parent, Saturn, that is contributing to the color. Electric Universe advocates argue that Saturn moves within the plasmasphere of the Sun and interacts with the Sun’s electric field. Since planets and moons in the Solar System are charged bodies that are not isolated in space, it is to be expected that they transact electrically with each other. Dione emits ionic plumes due to its position in Saturn’s circuit.

The ring formation around Rhea is probably the remains of pulverized rock and ice that billions of watts of electricity created when they catastrophically passed through the moon’s conductive strata at some time in the past. As previously written, more than one quarter of Phoebe’s mass has been removed and has been distributed throughout the Saturnian system. The reddish-black soot covering Dione and the other inner moons of Saturn most likely came from Phoebe.