On the Ball — A History of Terrella Research — Part 2 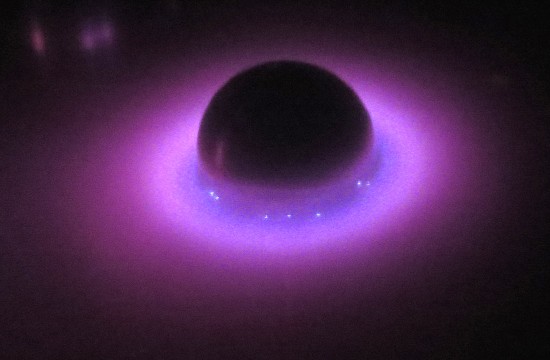 In 1742, the French natural philosopher John Theophilus Desaguliers (1683-1744) formulated some of the first generalisations regarding the electrification of air. That – as well as Halley’s work, presumably, although he did not cite it – inspired Pontoppidan, writing in 1755, to propound an electric nature of the aurora:

“… the original cause of the north-light lies in the electricity of the etherial air … The terrestrial globe, together with its atmosphere, may be considered as the glass-globe of the electrical machine. Upon the air being exhausted, and the globe whirled about with velocity, there appears within it a purple flame, and this is the colour of the north-light; now this flame must be the æther igneus. … the north-light observed towards the pole or axis of our earth, does not only owe its origin to the æther, but is the very æther itself … For these exhalations have then nearly the same effect in the atmosphere, as the aforementioned intrusion of the air into the glass-globe …”

Auroral specialists Brekke & Egeland commented that “Pontoppidan’s auroral theory was far ahead of his time, and he is believed to have been the first who showed a relationship between the northern light and electrical phenomena.”

Over the following centuries, terrellae came to be constructed of other materials than lodestone or glass and put to a variety of uses, typically involving magnetism and glow discharge, while not always representing the earth or any celestial objects any longer. During the 19th century, the typical form seems to have been a hollow sphere composed of brass or aluminium and subjected to variable conditions such as its suspension in a vacuum tank or the application of an electric current or magnetic field to it, external or internal.

The German baron Carl von Reichenbach (1788-1869) – often regarded as an oddball for his ideas about an ‘Odic force’ – reported on his experiments with terrellae in 1851. Placing an electromagnet within a large hollow iron sphere and applying varying degrees of electrification to it, he obtained forms resembling the polar aurora. In this tradition, the famous Norwegian scientist Kristian Birkeland (1867-1917) conducted numerous experiments with his own assortment of terrellae, which he invoked in order to explain the auroral ovals, sunspots, the zodiacal light, cometary tails and the rings of Saturn.

Ever since, terrella research has been on a roll. Throughout the 20th century, scientists frequently used terrellae to model helio- or geomagnetic problems, such as the trajectories of particles in a dipole field. The roll call includes the studies of Malmfors, Block, Hänsel, Quinn & Fiorito, Podgorny and – omitting quite a few others – most recently the French Jean Lilensten and his group.

Doubtless, future hands-on simulations of this type still hold a few surprises in store, especially if the near-earth atmosphere and plasma environment could be modelled with greater precision. One area to which terrellae could be fruitfully applied are geomagnetic reversals or excursions. These episodes of wandering and weakening geomagnetic poles, during which the multipole field comes into play and atypical auroral morphologies likely emerge, have punctuated the history of the planet. The bulk of research on this ‘field in flux’ is conducted by means of computer simulations, but – heeding Peregrinus’ advice – a practical experiment on a model earth could accelerate the work considerably.

Replicating geomagnetic reversals or excursions on terrellae would be a worthwhile endeavour in its own right, for the sake of pure science and to assist in the interpretation of palaeo- and archaeomagnetic data. The study of human traditions – and by implication of religion, society and history – stands to gain much as well, because planet-wide geomagnetic perturbations have apparently occurred since the last Ice Age as well. The attendant aurorae, along with a host of natural catastrophes, appear to have had a formative effect on the human psyche in multiple ways. If plasma physicists were able to model such extraordinary events on terrellae, now that would be a wholly new ball game.