Home Picture of the Day The Ring is a Barrel

The Ring is a Barrel 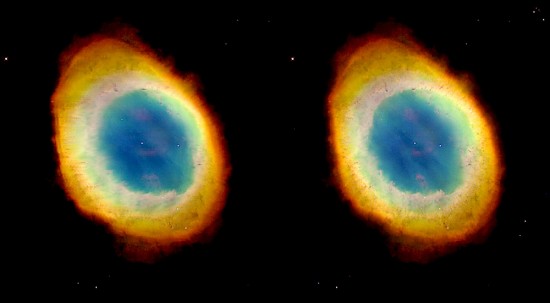 The Ring Nebula could be called the “Tube Nebula”.

“Bipolar outflow” is a term often used to describe the nebular structure seen above, although the cause of the effect remains baffling to consensus astronomers. The prevailing opinion is that nebular structures form “knots” because gases and dust “blow” through them: “winds” created by “shock waves” from exploding stars. In many cases, a nebula is described as “star forming,” because intense X-ray radiation, or extreme ultraviolet light, are thought to indicate that nuclear fusion reactions are occurring within the cloud. The winds and shockwaves are said to cause wispy clouds, with densities so low that a puff of smoke would seem solid, to coalesce into ever greater concentrations, eventually giving birth to stars.

Electric Universe theory, on the other hand, sees plasma, not hot gas, flowing through space. The physics of electricity applies, not the physics of wind. Within the shell of a planetary nebula are one or more plasma sheaths, or double layers, that act like capacitors, alternately storing and releasing electrical energy. The current flow alternately increases and decreases within the sheaths inside and outside the shell.

An electric discharge in a plasma cloud creates a double layer along its axis. Positive charge builds up on one side and negative charge on the other. A strong electric field exists between the sides and if enough current is applied the double layer glows, otherwise it is invisible and is described as “dark mode”.

A neon lamp that emits light only at the excitation frequency of a specific gas is a more correct model for nebulae. Electricity passing through neon gas causes it to form a plasma and to glow a pale yellow. Other gases, such as oxygen or hydrogen, produce blue and red light, while heavier elements emit their own colors. The Ring Nebula exhibits emissions at all of those wavelengths.

Ideas like this are unfamiliar to astronomers who think in absolute terms of gravity and mass—they seldom think about charges. They think of charged particles moving along a magnetic field as a “jet” instead of a field-aligned Birkeland current. They think of abrupt changes in the density and speed of charged particles as a “shock wave” instead of a double layer that can even explode.

Plasma’s behavior is driven by fluctuations in electric charge flow. This means that electric forces in double layers can be several orders of magnitude stronger than gravity. Double layers separate plasma into cells and filaments that can have different temperatures or densities.

In the case of M57, the image above is a view “down the barrel” of a Birkeland current filament pair spiraling down and concentrating electrical energy. The Bennett pinch regions are seen end-on, where electricity flowing into them causes plasma to radiate in a glow mode discharge.