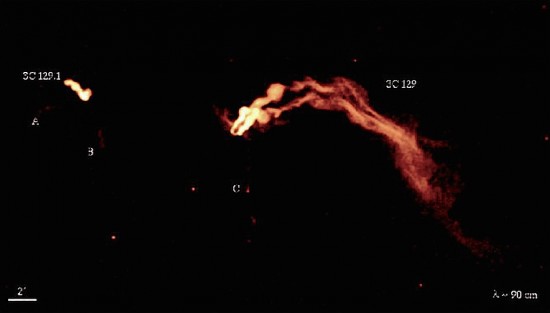 Comets are not the only objects with tails.

Since comets and their characteristics are in the news, it is good to remember that not all objects with tails are comets. Venus, for example, possesses a filamentary comet-like tail that stretches for millions of kilometers. Indeed, at its closest approach to Earth, every 584 days, the tail interacts with Earth’s magnetosphere.

The gas giant planets could also be said to have cometary tails. For instance, Jupiter’s magnetosphere stretches in an elongated ellipse all the way out to Saturn’s orbit; an incredible 680 million kilometers when they are at their closest to each other. When the Pioneer 10 spacecraft crossed Saturn’s orbit, it also went behind Jupiter in relation to the Sun. At the time, mission specialists were shocked to discover that no charged particles from the Sun were detected, indicating that Jupiter’s magnetosphere was modulating the solar wind at a distance of several hundred million kilometers.

Earth’s cometary plasma tail, otherwise known as the magnetosphere, changes shape and power as it transacts with electric charges pouring from the Sun: the solar wind. Earth’s magnetospheric tail points away from the Sun in the same way a comet’s tail does because of electrical effects from high-speed ions.

When the Moon revolves through ionized plasma surrounding Earth, materials in the lunar regolith gain a negative charge, causing them to repel each other and drift off the surface. As mentioned in a previous Picture of the Day, charge differential between the day and night sides of the Moon generates an ion “wind” flowing from the negatively charged night side into the more positively charged sunlit side. The electric fields between the two hemispheres can vary by as much as 1000 volts.

The planet Mercury’s tail was another “unexpected” discovery because planetary scientists ignore plasma physics. Electric Universe theory states that comet tails are created when a cometary plasma sheath accumulates enough electrical potential to discharge, causing it to glow. Irrespective of their individual composition, comets obey the fundamental behavior of charged objects within a plasma shell.

Mercury’s tail contains a high concentration of sodium atoms. In 2008, astrophysicists at the McDonald Observatory in Texas measured Mercury’s sodium tail, finding it to be over four full Moons long. One of the most interesting aspects about their observations was that the sodium appears to be coming from two high latitude “hot spots” on Mercury.

When the MESSENGER spacecraft flew by Mercury, the hot spots were found to be where mainstream planetary scientists say material is being removed from the planet’s surface by “radiation pressure” from the Sun. Since Mercury has no atmosphere and no magnetic field to shield it from the Sun, as previously mentioned, the Moon might help to explain the phenomena. If voltage differentials on the Moon can be explained by electricity, then Mercury’s features might also be illuminated by an electrical hypothesis. Jupiter’s moon Io might also be a useful model to use for Mercury’s hot spots.

Io is in close orbit with Jupiter, so intense electromagnetic radiation bombards its surface, removing approximately one ton per second in gases and other materials. Io acts like a generator as it travels through Jupiter’s plasmasphere. More than four hundred thousand volts at three million amperes of current flows into the electric environment of Jupiter from Io.

Perhaps Mercury is experiencing something similar. The hot spots could be where dense plasma foci connect Mercury with the Sun. Cathode erosion of Mercury might also provide a reason why its tail seems to be a filamentary structure, reminiscent of Birkeland currents that have been discussed many times in these pages.

The concept of filamentary tails induced by electric charge exchange is not just confined to the Solar System. Previous Picture of the Day articles point out that stars also have tails, as do galaxies. Mira is a red-giant star with a tail extending from it for about 13 light-years. Galaxy ESO 137-001 exhibits a 200,000 light-year-long tail. It seems that all celestial bodies can be energized by the plasma in which they reside. Since 99.99% of matter in the Universe consists of charged particles, it could be said that plasma reigns over all.