Home Picture of the Day Enceladus is not at Fault

Enceladus is not at Fault 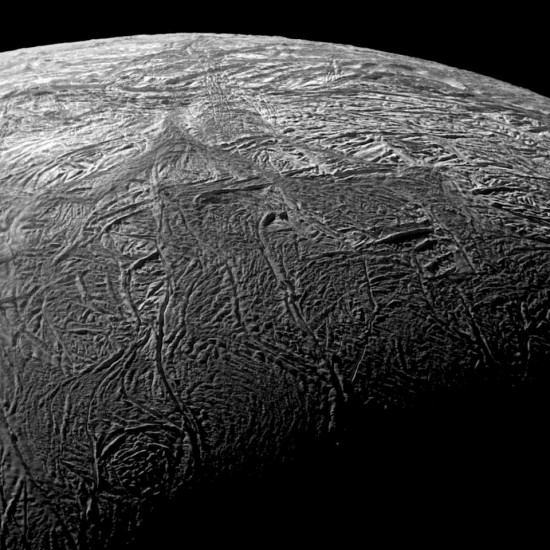 Plumes of water vapor from Enceladus are not caused by friction.

Saturn’s moons are difficult explain when conventional ideas about the composition and age of the Solar System are considered. They vary in composition, orbital inclination, size, and mass. With 62 moons now identified, and 53 of them named, Saturn appears more like a miniature Solar System.

Many Picture of the Day articles discuss Saturn’s moon, Enceladus. Enceladus was the son of Ouranos; one of the Gigantes, or Titans, overthrown by the god, Zeus. Since the moon Enceladus is a tiny world, only 494 kilometers in diameter, its name could be considered ironic. Its gravitational acceleration is about 10% of Earth’s 1g field, so a strong jump could conceivably result in going into orbit, provided there could be some way to survive a temperature of -201 Celsius (and the vacuum).

The discovery of water vapor “geysers” erupting from Enceladus was a surprise to mission specialists assigned to the Cassini mission. The “tiger stripe” terrain, out of which jet the plumes of vapor, are most likely manifesting a weaker version of the massive electrical activity that once carved and punctured Enceladus with magnetically confined plasma beams.

Once, the consensus opinion was that the tiger stripe features are most likely caused by “shear heating”, as lateral faults in the crust are set in motion by Saturn. Water vapor escaping from the cracks is dissociated by the intense environment, whereupon it flows along electromagnetic flux tube connections with Saturn, injecting immense clouds of charged particles into the gas giant’s plasmasphere.

Recently, the friction-based plume theory, was put to rest by planetary scientists. They found that each vapor plume corresponds to a “hot spot” a few meters across. This reading led to the announcement that the spots are, “too small to be generated by fracture walls rubbing together”.

Electric arcs can produce braided rope-like trenches when plasma filaments move across a surface. However, large formations on Enceladus are not being actively cut and distorted today, however. It is possible that they are the remains of the aforementioned massive plasma discharges from Saturn or the proximity of some other charged object that at some time in the past initiated the circuit. Today, the remnant electric fields are continuing to modify Enceladus with “dark mode” discharges, but the effect is less dramatic than it was in the past.

Considering the small size of the moon, the tiger stripes are comparatively large. It is easiest to get an idea of what is happening on Enceladus by comparing it to another moon in the Solar System: Jupiter’s moon Io, with its traveling “volcanic caldera,” dual-ridge faults, and broad, smooth valleys. Enceladus appears to be like Io’s sister from another mother.

Io acts like an electrical generator as it travels through Jupiter’s plasmasphere, inducing over 400,000 volts across its diameter at more than three million amperes. That tremendous current flows along its magnetic field into the electric environment of Jupiter. The same kind of electromagnetic activity connects Enceladus with Saturn’s poles: an ultraviolet “footprint” can be seen in Saturn’s auroral oval.

During an August 11, 2008 flyby of Enceladus, Cassini’s plasma sensors found ion and electron beams propagating from Saturn’s northern hemisphere. They were something of a puzzle until it was noted that time-variable emissions from Enceladus’ south polar vents matched-up with the auroral footprint’s brightness variations on Saturn.

NASA scientists continue to monitor the plumes from Enceladus, waiting to see if there is a definite connection between the two phenomena. Electric Universe advocates assume that their results will confirm electrical exchanges between Saturn and its moon.