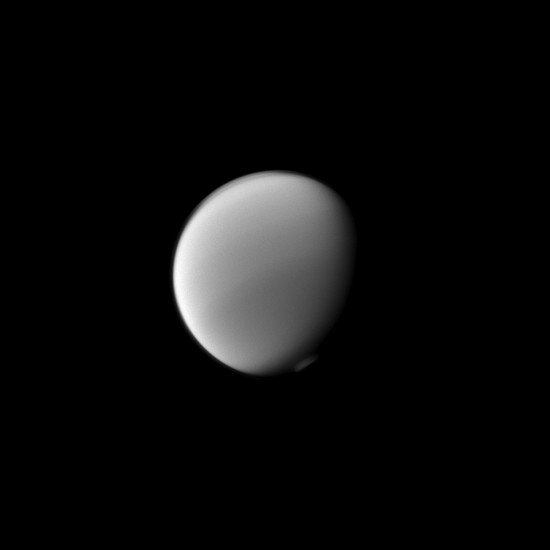 A salty ocean beneath Titan’s ice?

NASA launched the Cassini-Huygens spacecraft On October 15, 1997. The bus-sized, six ton payload was the largest deep space mission ever deployed, requiring a seven year journey to Saturn. Cassini-Huygens entered orbit around Saturn on June 30, 2004. Its name has been changed twice since then: the Cassini Equinox Mission was a two-year extension that began on July 1, 2008, following the completion of its Prime Mission from July 1, 2004 to June 30, 2008. Subsequently, its name was changed to the Cassini-Solstice Mission, named for the summer solstice on Saturn that will take place in May 2017.

One of the most puzzling Cassini discoveries is that methane gas continuously escapes from Titan’s low-gravity environment. Sunlight is also dissociating methane molecules in its upper atmosphere, changing them back into their carbon and hydrogen constituents. Since modern astronomy proposes that Titan is billions of years old, how has that methane atmosphere survived for countless eons? With so much loss, Titan’s atmosphere should have evaporated a long time ago. Astrophysicists can only imagine oceans of liquid methane beneath the cloud cover as a source of replenishment.

When the Huygens lander touched down on a flat, rocky plain, the idea that Titan is “wet” with hydrocarbons suffered a serious blow. No methane was falling from the sky and no methane puddles were visible. Rather, in keeping with images sent from orbit, a vast dry area covered with “sand dunes” was seen.

The surface temperature on Titan averages minus 180 Celsius. It is so cold that if water were present it would be more like rock and would not contribute to any chemistry on the frigid world. What force can create patterns of fine particles heaped into regular piles, some hundreds of meters high, despite the disparity in environments?

On Titan, the dunes are quite large, being visible from the Cassini orbiter thousands of kilometers away. They are also well-defined, almost solid-looking waves. They appear to follow the prevailing wind patterns on Titan that blow a mere 8 kilometers per hour, but they also have some unusual characteristics that may mean they are not generated by wind in the conventional sense. Many of the dunes look like fingerprint patterns—they have whorls and arches that are crisscrossed by other ripples in a perpendicular arrangement.

On Earth, dunes are found only in the driest places. The sand grains and dust must be able to slide freely over one another for the dunes to pile up and move across the landscape. Strong winds are usually required to move the sand. In some places, such as Australia’s Simpson Desert, sand dunes have become fossilized and immobile. Whatever deposited the sand there was unable to move it again, so they have crusted over, plants have taken root, and gullies have formed.

According to a recent press release, Cassini mission specialists have “firm evidence” that there is a salty ocean inside Titan. On March 6, 2014 the spacecraft made its 100th, and closest flyby of the hazy moon. Over the course of those flybys, mission specialists, analyzing topographic and gravity data, have come to the conclusion that water is present within Titan.

The evidence for a salt-water ocean under Titan’s ice is based on comparisons with Earth. For the gravity data to make sense, there “must be” high density within the moon. The data also indicates that Titan’s crust varies in thickness, implying that it is “stiff”. The researchers explain that rigidity by judging the interior to be slowly freezing solid. Since it is freezing over time, it “must be” a water ocean.

Team members also speculate that Titan is “wet” with hydrocarbons. In fact, when Huygens landed on Titan, it sank slightly into a somewhat friable surface. NASA planetary scientists described it as “like wet snow,” or “loose clay.” Before the Huygens lander was placed aboard Cassini, a probe attached to the bottom was dropped into a variety of materials. A pressure sensor was programmed with the results, so that the surface composition of Titan could be determined. Although the mission team preferred to report that the lander encountered something moist, the data was also indicative of dry sand. There was detectable methane around the probe, but it quickly dissipated—presumably because of the heat emanating from the lander.

Despite claims from NASA that there are “lakes” of liquid ethane and methane on its surface, Titan appears dry, with craters that have folded rims and wide, flat bottoms (often with more than one tier or concentric basin), parallel fractures, large domes similar to those on Venus, and Lichtenberg figures (called river channels by the Cassini team) cut into the surface, then perhaps a better explanation for what happened to Saturn’s planet-sized moon might be found by considering Mars.

On Mars, dunes have been identified with intense electrical activity. Plasma discharges excavated material, blowing it upward along the path of charge flow where it then fell away, forming what are called “wind streaks.” Dust is most likely charged on Mars, so particles can be attracted or repelled from one another, depending on their polarity. Therefore, they line-up in the same way that iron filings align with a magnetic field. It is possible that that is the mechanism behind the dune structures on Titan, as well.

There is a great “sand sea” called Belet on Titan. If, like Earth, Venus, and Mars it represents the fragments of rock strata that were destroyed by electric discharge activity and then ionically deposited in masses of sand larger than the State of Michigan, it is probably the source for the dunes. Dry, cold, covered with sinuous rilles, gigantic craters, chaotic topography, and thousand-kilometer ridges of piled-up dust 500 meters high, Titan is one more example of catastrophic devastation among the Sun’s family in the recent past.

Since mass concentrations are found on the Moon, and gravity anomalies abound on Mars, with no evidence of sub-surface oceans, a better explanation for those observations on Titan might include electricity.