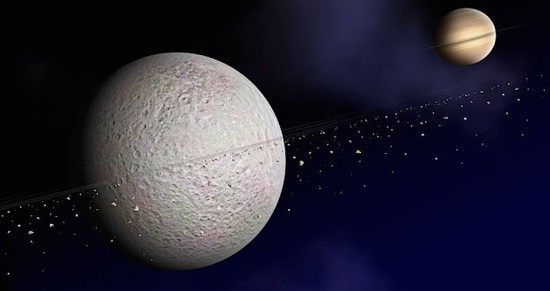 Evidence for the dust cloud came from a gradual drop on either side of Rhea in the number of electrons detected by two of Cassini’s instruments.

Scientists from the Jet Propulsion Laboratory in Pasadena, California discovered a “debris ring” surrounding Saturn’s frigid moon, Rhea. The Cassini space probe, currently orbiting Saturn, discovered the signals that indicate a potential ring with its Magnetospheric Imaging Instrument, when the electron flux from the giant planet was seen to abruptly cutout on each side of Rhea’s disk.

Geraint Jones, lead author of a paper that appeared in the journal Science wrote: “Until now, only planets were known to have rings, but now Rhea seems to have some family ties to its ringed parent Saturn.” It comes as no surprise to find that Rhea has joined its sister moons in “flinging” great quantities of material into space.

In a previous Picture of the Day article about the “active” moons Tethys and Dione, features thought to be asteroid scars were found to be the points where flowing currents of electricity remove charged particles and launch them into space. Matter is continuing to be attracted along a circuit path to the plasmasphere of Saturn. Contemporary electrical interactions between celestial bodies are nothing like what must have taken place in the past.

Rhea’s surface is fractured and carved in ways that point to surges of energy that were great enough to nearly destroy the moon. There appear to have been explosions big enough to rock the planetoid, but there are no boulders or blocks of stone that would be expected as a result of them. However, If electric arcs decimated the moon in the relatively recent past, the rock and ice were probably vaporized, torn apart into small pieces and then ejected into space.

The ring of debris surrounding Rhea is most likely a clue to those events. Electrical theorists argue that Saturn moves within the plasmasphere of the Sun and interacts with the Sun’s electric field. Because planets and moons in the solar system are charged bodies that are not isolated in “empty” space, it is only to be expected that they would transact electrically with their primaries. The simplest, most straightforward explanation for the ionic plumes emitted by Tethys and Dione — and now Rhea — is electric discharge due to their position in Saturn’s circuit.

There is no need to conjure implausible inertial dynamics (“tides” or “gravitational kneading”) to account for these remarkable events. By that same token, the ring around Rhea is the remains of the pulverized rock and ice from billions of watts of electricity catastrophically passing through the moon’s conductive strata.