Home Picture of the Day Chang’e 3 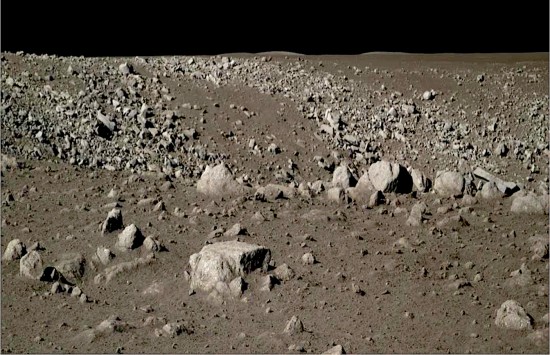 The surface of the Moon from the Yutu lander. Credit: CNSA

On December 2, 2013, the China National Space Administration launched Chang’e 3, a robotic lander with an accompanying rover, on a mission to study the Moon. The lander was named after the Chinese Moon goddess, while the rover’s name, Yutu, refers to one of her companions, the Jade Rabbit.

Yutu’s objective was to scan the area surrounding Chang’e 3’s landing site, analyzing minerals, while attempting to create a selenological context. Team members hope to add to the content of data about the structure of the Moon, since it is the first time in decades that anything has landed on the Moon that can move around.

In February of 2014, Yutu malfunctioned. Sensitive instruments on its mast could no longer be folded down to shield them from the frigid temperatures of lunar night: below -180 Celsius. Although Yutu’s signal can still be detected broadcasting from the Moon, it has not moved in several years and its camera systems are now inoperative.

The cameras onboard Chang’e 3 were of greater resolution than anything previously launched, so they provided data that continues to occupy research scientists. The spacecraft also contains gamma ray detectors, charged particle detectors, radar scanners, a microwave radiometer, IR detectors and HDTV optical imagers. New images and telemetry will help to confirm the theories of an early Electric Universe proponent, Ralph Juergens.

As long ago as 1974, Juergens identified many problems with the standard interpretations of lunar topography. Previous Picture of the Day articles discuss the bright rays of Tycho Crater (among other craters), proposing that the rays are not caused by meteoric impact ejecta, but are the sign of a plasma discharge.

Plasma arcs excavated the crater, but first they drew electrons from halfway around the Moon to form the initial leader stroke into space. That explains why the bright rays converging on Tycho do not point to the crater’s center: the return stroke that traveled back along the conductive pathway, forming the crater, had moved on in that brief instant.

Another set of features identified by Juergens as electrical phenomena is the “sinuous rilles” that wend their way through the lunar landscape. Because the Moon exhibits very little geological activity, Juergens thought that the rilles might have formed in a catastrophic event that left its forensic evidence behind. The Moon has no atmosphere, so its surface is similar to a vacuum-sealed and freeze-dried environment, perfectly preserving any remains like fossilized imprints.

Juergens knew that the rilles, in particular, could not have been created by the collapse of lava tubes or by liquid flowing across the surface. When a lava tube collapses, the roof caves in and leaves heaps of debris clumped on the floor. Such debris is missing from the rilles.

Flowing liquids erode the sidewalls of canyons and gullies in certain ways and create deltas of sand and mud downstream. There are no outflow channels or deltas associated with lunar rilles. Coupled with the fact that the rilles travel uphill and downhill without regard for the steepness of the terrain, Juergens concluded that they were electric discharge trackways:

“The electric field between anode and cathode must build to an intensity great enough to ‘pull’ electrons from the cathode by sheer force…tearing electrons from non-conducting lunar crustal materials and in numbers sufficient to trigger an interplanetary discharge…. In a flash, the tiny breakdown point becomes a breakdown path propagating itself outward from the starting point, turning this way and that as the intense field at its tip probes for weaknesses in the rock strata”.

As more information has come in from various telescopes around the world and from space-borne systems like the Chang’e 3 mission, the same features seen on the Moon have been discovered on the moons of other planets, as well as the rocky planets, themselves. Since Juergens’ day, there have been Venus probes, Mars rovers, Mercury orbiters, a Saturn orbiter, an orbiter mission on its way to Jupiter, a Pluto flyby and several more voyages of exploration into space. They have provided the Electric Universe hypothesis with an embarrassment of riches while causing the conventional theorists to invent new “corrections” for the standard theories of Solar System evolution.