Home Picture of the Day Jupiter and the Sun

Jupiter and the Sun 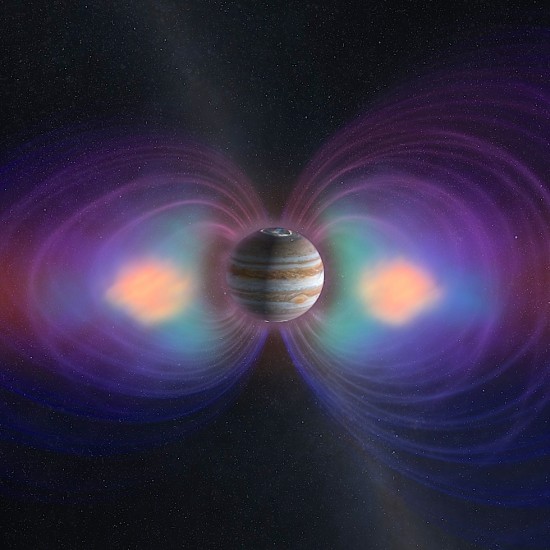 The Sun influences all the planets.

Jupiter is the largest planet in the Solar System. It is so massive, that it is greater than all the other planets and moons combined. Jupiter is 142,984 kilometers in diameter at its equator, but it rotates so fast its day lasts only about 10 hours. That rapid rotation causes its equatorial diameter to be 9275 kilometers more than the distance between its poles.

Jupiter possesses a toroidal electromagnetic field extending outward for 650 million kilometers, reaching beyond Saturn’s orbit. Charged particles from the solar wind, as well as from Jupiter, itself, are trapped in its magnetic field, creating a vast plasma sheath similar to the Van Allen belts around Earth. The plasmasphere around Jupiter emits lethal radiation that is thousands of times greater than the Van Allen belts, however. Any manned missions would require a spacecraft with heavy shielding.

The Galileo spacecraft discovered electric currents flowing around the planet, just as Electric Universe advocates predicted. As Jupiter’s moon Io revolves, more than 2 trillion watts of power is dissipated between them. The electricity travels in Jupiter’s magnetic field, creating lightning in the planet’s upper atmosphere, as well as intense aurorae at the poles.

The planet has thin rings surrounding it, as well, as do all of the gas giants. Jupiter’s rings are formed out of a thin sheet of material encircling the planet, and were unknown until about thirty years ago. The ring structure is quite diffuse, making observations difficult unless they are in correct alignment with the Sun. The outer radius begins at 129,000 kilometers, almost the same distance as the moon Adrastea.

The four small moons, Metis, Adrastea, Amalthea and Thebe, are said to influence the structure of Jupiter’s rings in the same way that the “shepherd moons” of Saturn govern the shape of its huge ring formation. However, as previous Picture of the Day articles about Saturn point out, there is evidence to suggest that electricity is a primary factor in the structure of any ring system.

Conventional theories assume that the Universe is electrically neutral, so when observational evidence confirms electrically active plasma for instance, localized phenomena no matter how improbable are invoked. Tidal forces and volcanoes are presented as the cause for the activity seen on Io, for example, rather then the several million ampere charge flow that exists between it and its parent body. In the case of Jupiter’s rings, the same thing is happening. The charges detected in the ring plane by Galileo are said to be caused by sunlight and shadow rather than by an electric circuit between Jupiter and the Sun.

An electrical interaction between Jupiter and its moons means that they are charged bodies and are not electrically neutral. Jupiter exists in a dynamic electrical relationship to the Sun. As solar max begins, Jupiter’s aurorae are becoming more active, with bursts of extreme ultraviolet light detected. Some research papers attribute the auroral flares to “…pulsed reconnections of the magnetic field at the planet’s dayside magnetopause…”

The light bursts from Jupiter’s aurorae are said to be the result of “magnetic reconnection” events. The solar wind is said to “stretch” its magnetic field like a rubber band. When it “snaps back” the over-stretched magnetic field lines explode, converting some of the “magnetic energy” to heat and light. As was discussed in a previous Picture of the Day, how that energy is released is not known. It seems, though, that space scientists are reversing cause (electric currents) and effect (magnetic fields). They downplay or deny the importance of electrical processes.

Retired Professor of Electrical Engineering Donald Scott’s admonitions about magnetic reconnection should be kept in mind: